The deal was originally negotiated during the Obama administration. 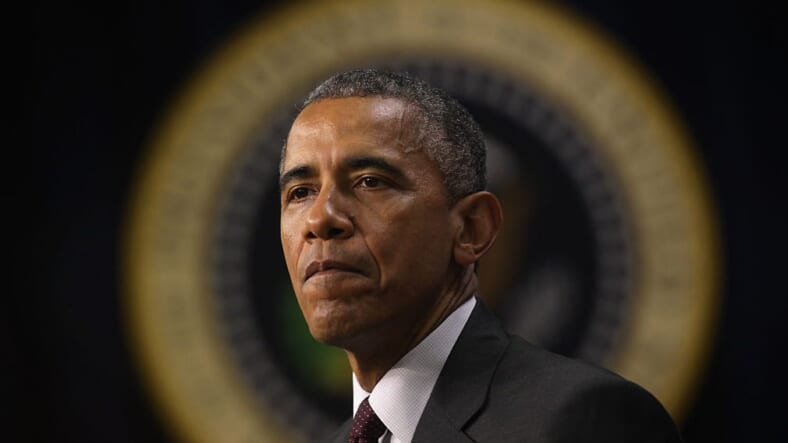 U.S. President Barack Obama pauses as he speaks during an event to recognize emerging global entrepreneurs May 11, 2015 at the South Court Auditorium of Eisenhower Executive Office Building in Washington, DC. Entrepreneurs from across the U.S. and around the world participated, ahead of President Obamas travel to the Global Entrepreneurship Summit in Kenya this summer, in the event which focused on investing in women and young entrepreneurs. (Photo by Alex Wong/Getty Images)

Former President Barack Obama had strong words for President Donald Trump‘s decision to pull out of the Iran nuclear deal.

It was under the Obama administration that the Joint Comprehensive Plan of Action (JCPOA) was negotiated and implemented. In a nutshell, the 2015 JCPOA lifted sanctions against Iran in exchange for Iran limiting its nuclear program and allowing for international inspections.

Now, as the Trump administration waits to see how other countries impacted by the deal will react, Obama has issued a detailed statement explaining why pulling out of the pact is a ‘serious mistake.’

The statement in full:

The reality is clear. The JCPOA is working – that is a view shared by our European allies, independent experts, and the current U.S. Secretary of Defense. The JCPOA is in America’s interest – it has significantly rolled back Iran’s nuclear program. And the JCPOA is a model for what diplomacy can accomplish – its inspections and verification regime is precisely what the United States should be working to put in place with North Korea. Indeed, at a time when we are all rooting for diplomacy with North Korea to succeed, walking away from the JCPOA risks losing a deal that accomplishes – with Iran – the very outcome that we are pursuing with the North Koreans.

That is why today’s announcement is so misguided. Walking away from the JCPOA turns our back on America’s closest allies, and an agreement that our country’s leading diplomats, scientists, and intelligence professionals negotiated. In a democracy, there will always be changes in policies and priorities from one Administration to the next. But the consistent flouting of agreements that our country is a party to risks eroding America’s credibility, and puts us at odds with the world’s major powers.

Debates in our country should be informed by facts, especially debates that have proven to be divisive. So it’s important to review several facts about the JCPOA.

First, the JCPOA was not just an agreement between my Administration and the Iranian government. After years of building an international coalition that could impose crippling sanctions on Iran, we reached the JCPOA together with the United Kingdom, France, Germany, the European Union, Russia, China, and Iran. It is a multilateral arms control deal, unanimously endorsed by a United Nations Security Council Resolution.

Second, the JCPOA has worked in rolling back Iran’s nuclear program. For decades, Iran had steadily advanced its nuclear program, approaching the point where they could rapidly produce enough fissile material to build a bomb. The JCPOA put a lid on that breakout capacity. Since the JCPOA was implemented, Iran has destroyed the core of a reactor that could have produced weapons-grade plutonium; removed two-thirds of its centrifuges (over 13,000) and placed them under international monitoring; and eliminated 97 percent of its stockpile of enriched uranium – the raw materials necessary for a bomb. So by any measure, the JCPOA has imposed strict limitations on Iran’s nuclear program and achieved real results.

Third, the JCPOA does not rely on trust – it is rooted in the most far-reaching inspections and verification regime ever negotiated in an arms control deal. Iran’s nuclear facilities are strictly monitored. International monitors also have access to Iran’s entire nuclear supply chain, so that we can catch them if they cheat. Without the JCPOA, this monitoring and inspections regime would go away.

Fourth, Iran is complying with the JCPOA. That was not simply the view of my Administration. The United States intelligence community has continued to find that Iran is meeting its responsibilities under the deal, and has reported as much to Congress. So have our closest allies, and the international agency responsible for verifying Iranian compliance – the International Atomic Energy Agency (IAEA).

Fifth, the JCPOA does not expire. The prohibition on Iran ever obtaining a nuclear weapon is permanent. Some of the most important and intrusive inspections codified by the JCPOA are permanent. Even as some of the provisions in the JCPOA do become less strict with time, this won’t happen until ten, fifteen, twenty, or twenty-five years into the deal, so there is little reason to put those restrictions at risk today.

Finally, the JCPOA was never intended to solve all of our problems with Iran. We were clear-eyed that Iran engages in destabilizing behavior – including support for terrorism, and threats toward Israel and its neighbors. But that’s precisely why it was so important that we prevent Iran from obtaining a nuclear weapon. Every aspect of Iranian behavior that is troubling is far more dangerous if their nuclear program is unconstrained. Our ability to confront Iran’s destabilizing behavior – and to sustain a unity of purpose with our allies – is strengthened with the JCPOA, and weakened without it.

Because of these facts, I believe that the decision to put the JCPOA at risk without any Iranian violation of the deal is a serious mistake. Without the JCPOA, the United States could eventually be left with a losing choice between a nuclear-armed Iran or another war in the Middle East. We all know the dangers of Iran obtaining a nuclear weapon. It could embolden an already dangerous regime; threaten our friends with destruction; pose unacceptable dangers to America’s own security; and trigger an arms race in the world’s most dangerous region. If the constraints on Iran’s nuclear program under the JCPOA are lost, we could be hastening the day when we are faced with the choice between living with that threat, or going to war to prevent it.

In a dangerous world, America must be able to rely in part on strong, principled diplomacy to secure our country. We have been safer in the years since we achieved the JCPOA, thanks in part to the work of our diplomats, many members of Congress, and our allies. Going forward, I hope that Americans continue to speak out in support of the kind of strong, principled, fact-based, and unifying leadership that can best secure our country and uphold our responsibilities around the globe.

READ MORE: Trump thanks Kanye at NRA convention for doubling his African-American support