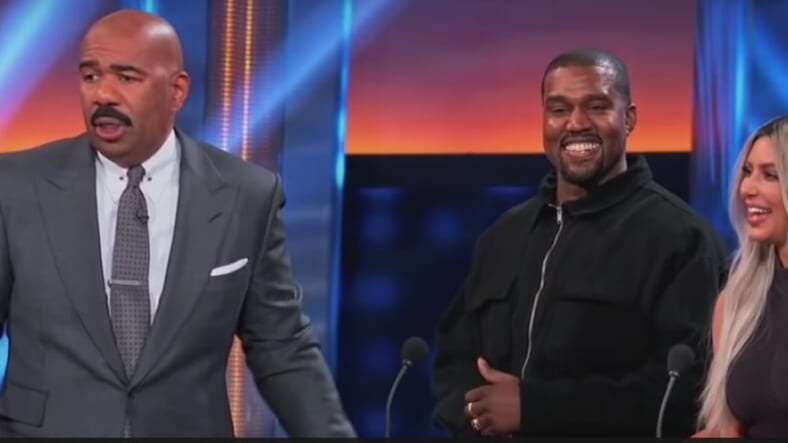 Over 7 million viewers tuned in Sunday night to watch the Kardashian-Jenner clan and the Wests battle it out on Celebrity Family Feud.

Yeezy fans, however, were surprised to find out that the Chicago rapper is an only child; well kind of. Turns out, Kanye West has step siblings, but they’re not on the best terms, which is why his cousins—Kim, Jalil and Ricky—appeared on the show along with him and his wife, reports Life & Style magazine.

In a 2015 interview with Heat magazine, Ye’s step-sister, Aliya Jones, didn’t mince her words and was quoted as saying: “A lot of people cheat, and it is much easier for him to cheat than anyone else. If you’re Kanye West and you’ve got women throwing themselves at you everywhere you go, there’s going to be temptations to stray.”

Not the most supportive thing to say about your step brother which is why it makes sense why they aren’t exactly close.

READ MORE: (VIDEO) Kim Kardashian on why she was skeptical Trump would free Alice Marie Johnson and why she thanks Ivanka

“No one thought Paris would happen in a million years, and now he’s seen it happen to Kim,” he told The Sun. “Ye is tired, he’s hurt, he feels betrayed and he’s probably feeling depressed. It’s like, who can he trust? You can’t trust anyone, even the people you’ve been paying to protect you.”

He added, “They haven’t been doing their jobs correctly. I think Kanye got to a point when he was fearing for his life and for his family’s safety because of what went down in Paris — I think it took a toll on him. He ends up walking about worrying and thinking, ‘Who’s going to do what to me?'”

The step-brothers haven’t seen each other since 2014, but Kanye is said to be close to Carmichael’s mom, Cheryl, who was married to Ye’s father, Ray West.

Family drama aside, the father of three was all smiles during Sunday’s episode of Celebrity Family Feud, which was taped back in February.

One of the many highlights came when host Steve Harvey presented the first question: “Name the top five reasons why Steve Harvey is a good kisser.” West immediately hit the buzzer and answered “Lips,” which caused everyone, including his wife Kim Kardashian-West, to erupt in laughter.