Give the father figure in your life the hero’s welcome he deserves.

Kyra Kyles
Da bomb Black Dads are going to hold you down, no matter what, so why not celebrate them in a way that they deserve. (Fotolio)

Ignore what the haters say, skip the problematic B.S. “baby daddy” card  circulated by American Greetings and Target, and stand up proudly as you celebrate and proclaim: Black dads are everything! And I should know because I personally had one of the best (rest in peace, W. Louis Kyles.)

This is why it truly and deeply disgusts me when people try to twist Father’s Day into Festivus, pointing out those who aren’t rising to the parenting challenge, or in an equally annoying move, aiming to co-opt a holiday that already belongs to Moms.

Instead, let’s use this precious time for its intended purpose; to uplift and empower the part of the population that doesn’t always feel the love, particularly the ones who are stellar examples of Black fatherhood. This is for all the best grilling, black dress socks with sandals wearing, catch you even with his eyes closed if you fall off a swing set saving dads. You know the kind of fathers who scare your errant suitors straight with little more than a level-eyed stare.

And nah, we aren’t going to do this by collectively buying them ugly ties, a set of new barbecue tongs or some overly complicated power tool.

Every Black father has at least one photo with his baby sleeping soundly on his chest.  It’s practically a rite of passage whether it’s that dog-eared ‘70s snap in the family album or the new InstaFamous image of John Legend and his baby girl, Luna.

I suspect that pops everywhere are made to swear a solemn oath to pose for that photo within the first three months of their infants’ lives. This awwww-inducing and iconic image demonstrates early on how dad is always going to be there for you, even if it’s to serve as a substitute Sealy Posturepedic. 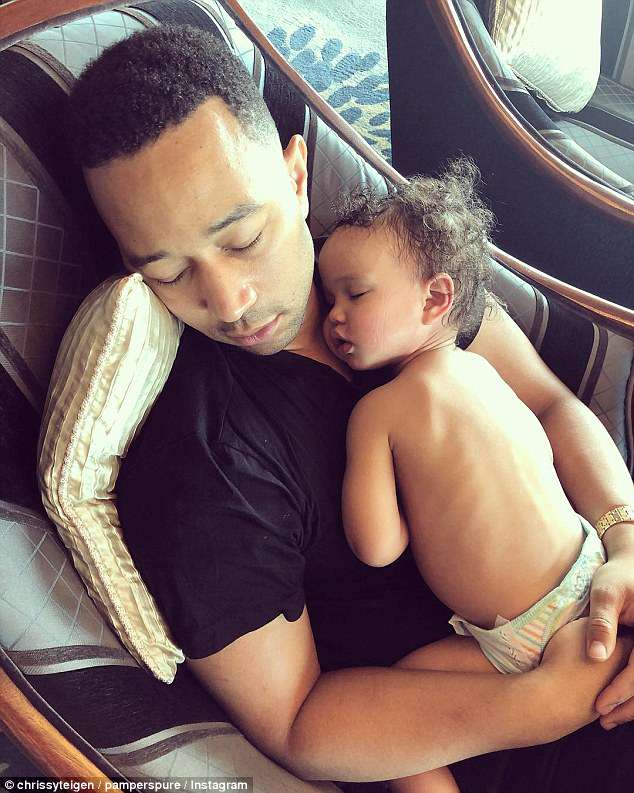 First off, if you re-watch this swoon worthy footage, the Bermudan ballet sensation aka #Daderina, is attentive. Like all our best dads, this man didn’t sit in the audience cringing or await an SOS cue from his daughter’s teacher, he sprang into immediate action when he saw how scared his toddler had become, even bringing Bella’s baby sis up there with him for added measure.

For another prime example of Big Poppas, check the master of the blended family, footballer Russell Wilson. Future Hive won’t agree as they clearly don’t want the affable NFLer anywhere near the progeny of the Lean King, but Wilson’s embrace (literally and figuratively) of baby Future is third parent goals.  And now that the adorable family has expanded with baby Sienna, you can’t convince me Wilson isn’t a Papi Prototype.

It got to be difficult to be the son of a rap legend. According to stern father lore, said history maker should technically be extremely critical of anything his heir apparent does so as to keep the legend alive. That could very well be going on behind the celebrity curtain, but it’s hard to believe when you look at the pure joy on Will Smith’s face when he FINALLY got to jump on to Jaden’s smash “Icon.”

This recently released remix, during which Mr. Summer Box Office himself flipped a verse in Spanish, is extremely impressive but it’s clear he wants the spotlight on his baby boy.  Now, of course, this is a follow-up move from when Big Will hilariously “recreated” the original uber viral video complete with the distressed denim jacket and a grill, but if you follow the elder Smith’s IG antics, you know the ode was all out of love and admiration for his son.

Speaking of hilarity: There’s a reason the term “dad jokes” exist, but Black dads take it to the next foreseeable level.

Whether they are cool and philosophical with their roast approach like Dave Chappelle or manic like Kevin Hart, you know that your pops will try to make you laugh…even if it’s occasionally at your own expense.  Just think of it as a character-building experience and no worries, you’ll get your chance to laugh back because no good dad is above being a punchline for your amusement.

Exhibit A: Throwback to one of our fave fathers of all time, former President Barack Obama slaying Sasha and Malia softly with terrible turkey pardon puns. (Pardon me, while I gather myself.  I still miss this man in the White House every day.) Moving on.

La Guardia Cross and Devale Ellis are two of the most recognizable, and inspirational, Black dads in this Age O’ the Influencer.

Ellis and his all-boy brigade reign supreme on Instagram. What they share (other than Papi status and a clear love for their children) is candor about the struggle to get attention in a house overrun with little ones.

Cross expressed his desire for cuddle time of his own in a hilarious Easter video that sent him on a quest for dyed eggs in exchange for…um…some hidden treats from wifey.  Ellis also recently “sparred” with his mini-me Kaz, accusing the tot of foiling his attempts to score some sexy time with wife Khadeen. Both these men gamely competing for a drop of their wives’ affection reminds us of one of the most important things about Father’s Day: It’s important to make sure that dad feels special too. So, yeah, go to sleep, Kaz.

Kyra Kyles is a multiplatform media executive, author, and speaker on media diversity. In addition to her 20-plus years as a journalist, including a tenure as Editor-in-Chief of EBONY, the Chicago-based co-founder of Myth Lab Entertainment is a filmmaker who co-produced/wrote/directed “Human Resources Season 2: Cubicle Creepshow,” a Web series that explores what happens when workplace horror stories meet monster movie classics.  And not for nothing, her father, W. Louis Kyles, was an entrepreneur, inspiration for the youth and supportive/hilarious dad who was quite clearly one of the best to ever do it. Happy Father’s Day! Follow Kyra @thekylesfiles on Instagram, Facebook, and Twitter.