The former First Ladies are united on this issue. 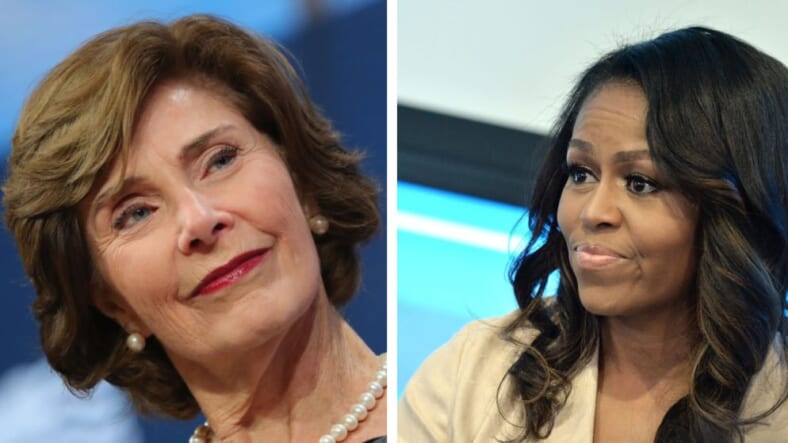 Laura Bush is sick of Donald Trump‘s abuse of power, and now has support from both sides of the aisle, including fellow former First Lady Michelle Obama.

Sunday, Bush spoke out against the Trump Administration’s policy of separating immigrant families, which immediately received an outpouring of bipartisan dissent.

“I live in a border state,” she wrote in a Washington Post op-ed on Father’s Day. “I appreciate the need to enforce and protect our international boundaries, but this zero-tolerance policy is cruel. It is immoral. And it breaks my heart.”

READ MORE: John Legend calls out Paul Ryan for his Father’s Day post telling him to reunite families separated at the border

According to the Department of Homeland Security, over a six-week period this spring, nearly 2,000 kids were taken from their migrant parents at the border, as a result of Trump’s “zero-tolerance” policy of separating children from their parents as they attempt to enter the US.

Bush (a mother and grandmother herself) cited the statistic in her piece, noting that more than 100 of those children are under the age of 4. She also explained that the government “should not be in the business of warehousing children in converted box stores or making plans to place them in tent cities in the desert outside of El Paso,” a reference to a former Walmart store in Texas where children are being housed and the Trump administration’s selection of a border-crossing point near El Paso as the site for a temporary shelter for immigrant children.

Bush then points out that the images coming out of such facilities are “eerily reminiscent” of Japanese-American internment camps during World War II, “now considered to have been one of the most shameful episodes in US history.”

“We also know that this treatment inflicts trauma; interned Japanese have been two times as likely to suffer cardiovascular disease or die prematurely than those who were not interned,” Bush wrote.

In response to her impassioned plea, Michelle Obama retweeted her article along with the caption, “Sometimes truth transcends party.”

This is definitely one of those times.