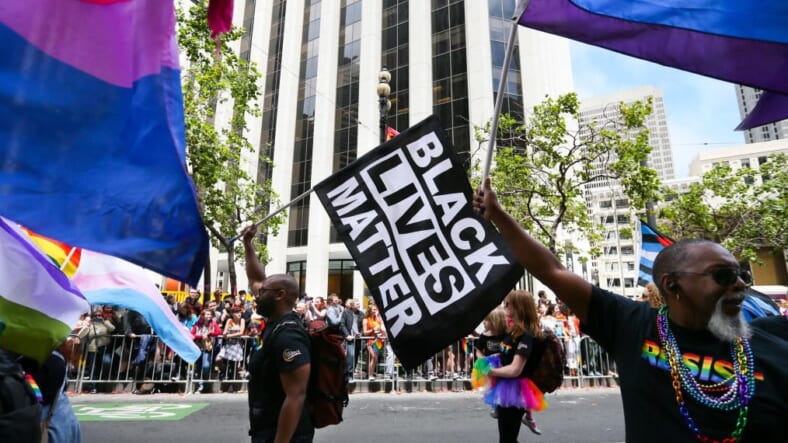 The death of 20-year-old rapper XXXtentacion took social media by surprise earlier this week as users lamented another tragic shooting of a young Black man. As tribute posts rolled in from hip-hop and entertainment elite, it was becoming eerily clear that the community was finding a way to humanize a person known for his abuse against Black women and Black queer people—specifically nearly beating a cellmate to death because he thought he “looked at him in a gay way.” Surviving homophobia has quickly become agenda item number one for Black queer people who continue to suffer at the hands abuse with no recourse or action against the abuser.

Unfortunately for queer people, the violence that we face vs the silence that we see from the community when said violence is reported is nothing new. Look no further than November of 2017 when a young Black boy by the name of Giovanni Melton was murdered by his father for being gay. His father stated, “I’d rather have a dead son then a gay son” as his final parting words. As some media outlets carried the story, many social media users made it clear Giovanni’s sexuality was just as much a problem as his father’s homophobia. And the headlines disappeared within a few days.

We have seen stories of boiling hot water thrown on a gay couple peacefully sleeping together at a family members house leaving them with third degree burns. The outrage from our hetero family was nearly mute. We have also watched the life expectancy for Black trans women drop to 35 years of age, with the murder rate rising and that expectancy continuously decreasing. Yet there are no protests. There are no hashtags for us. There is no loud uproar when the violence is against the queer community. There is just silence from those who choose to ignore our oppression, and the violence we continue to face at the hands homophobia.

Homophobia continues to be one of the biggest concerns in our community as we strive to fight against white supremacy. The assimilation that taught us to hate our own continues to divide Black community, rendering much of our fight for liberation useless as it is non-inclusive of the queer community. As queer people we are forced to watch our abusers, like XXXtentacion, be uplifted in their death and told that our plight just isn’t enough.

We can no longer allow homophobia and the violence towards the queer community to be so easily written off as a mistake of one’s past or present being. Too often, homophobia is discussed by heterosexual community as something that one must grow out of, or as something necessary to stop the emasculation of Black men. When we try to address them while living, we are given the excuse that folk need time to understand LGBTQ people. When we make an uproar in their death, we are told that we aren’t being sensitive enough and are chastised for celebrating someone’s demise.

Black queer people are not your enemy. In 2018 it’s almost ridiculous that this has to be said but the stakes are too high, and liberation is worth us fighting for a blackness that inclusive of a queerness. When we lash out it is because we are tired. We have existed since Black folks have existed. The erasure of our narrative as Black queer people doesn’t mean we never existed. Blackness encompasses a multitude of communities and subcultures and the dictating of what is acceptable by the heteronormative Black community mirrors how whiteness deems our respectability and value. The conditioning society has placed on us to oppress our own based on gender and sex continues to stop any movement towards freedom as a collective.

The Black Lives Matter movement was started by queer people. Queer people have always stood on the front lines fighting for those who often bring harm to us. We cannot continue to grow as a society if we allow our differences to outweigh our morality and our ethics. At NO TIME should a person be met with violence simply because they are not heterosexual. If we really want to learn and grown and accept, then the work has to be done.

At the end of the day though, acceptance was never our goal. Simply acknowledging that we deserve the same rights as you is all we really need. I don’t need to like you to know that you are a Black life worth fighting for. Black queer folk are not your enemy. Homophobia however is an enemy to us all.

George M. Johnson is a Black Queer Journalist and activist out of NYC. His debut young adult memoir All Boys Aren’t Blue is slated for Winter 2020. Follow him on Twitter or IG.