Inside Cardi B and Offset’s glamorous baby shower

The star-studded affair went down in Atlanta. 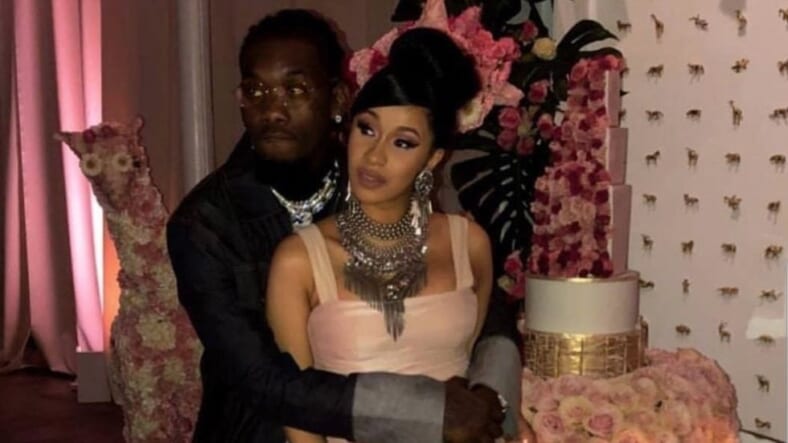 Cardi B and Offset celebrated the impending arrival of their daughter with a lavish, star-studded baby shower in Atlanta and by the looks of the photos and videos, it was lit, indeed.

The rapper told Rolling Stone she didn’t want a conventional baby shower and it looks like she got her wish. The glamorous affair attracted several celebrity guests and the expectant parents were dripping in diamonds when they entered the party.

“I want a lit baby shower…My baby shower’s not starting at no 5:00. My sh*t is going to start at 9 p.m. because that’s how I celebrate, that’s how Caribbean people celebrate,” she said. “I don’t like baby showers that be at 5 p.m. in the backyard, eating, cooking hors d’oeuvres. Nah…Sh*t, I might even drink some red wine. Red wine’s healthy, right?”

Cardi B. confirms she married Offset last year before the public proposal

The event was covered in floral arrangements with a beautiful cake and animals made out of pink and white flowers. It also featured a custom Bardi Baby Bodega as a tribute to Cardi’s Bronx roots. It was filled with treats for the baby as well as guests that included Monica Brown, Lil Mama, Mona Scott Young, and Kirk and Rasheeda Frost. The “Bodak Yellow” rapper shared some sweet moments from the shower on her social media pages and it looks like she and her husband had the time of their lives.

The hip-hop superstars reportedly have been married for months, according toTMZ. The site did some digging and found that a marriage certificate for the rappers is on file at the Fulton County Courthouse in Atlanta under their birth names: Kiari Kendrell Cephus (Offset) and Belcalis Marlenis Almanzar(Cardi).

The marriage allegedly took place Sept. 20, 2017, which means that very public proposal  in October at a concert in Philly was all for show because the two were already husband and wife.

On Sunday at the BET Awards, the Migos won for Best Group and Offset kinda let the cat out of the bag when he said: “I thank my wife. You should thank yours.”