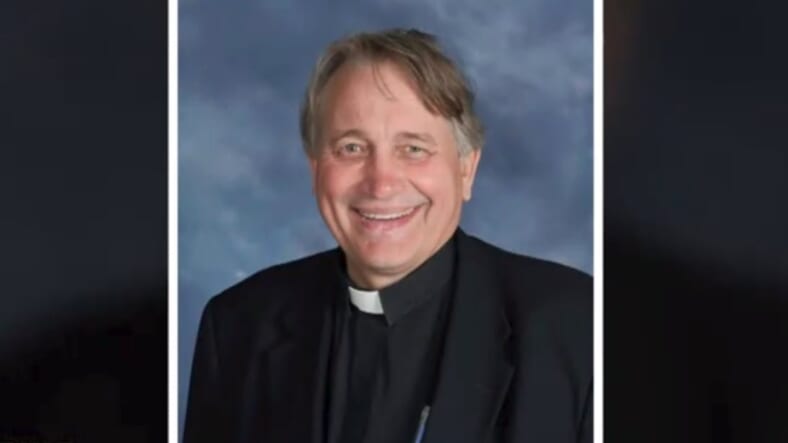 Rev. Michael Briese was nasty to the relatives of the late Agnes Hicks at Saint Mary’s Catholic Church in Charlotte asking them to leave the church after someone accidentally bumped and dropped the church’s chalise cup.(Courtesy of Fox 5)

The Archdiocese of Washington was forced to issue this an apology this week after an enraged priest kicked a Black family in mourning out of his church during a funeral and then went the extra mile to call the cops on them.

According to Fox5DC, the altercation happened Tuesday at Saint Mary’s Catholic Church in Charlotte Hall, Maryland.

Hundreds of mourners showed up to remember Agnes Hicks, but things came to a halt after someone accidentally knocked over and damaged the church’s sacred golden cup, also known as a chalice.

That’s when Reverend Michael Briese blew up at the family.

“All hell broke loose. He literally got on the mic and said, ‘There will be no funeral, there will be no mass, everyone get the hell out of my church,’” recalled Shanice Chisely, Hicks’ daughter.

Cellphones recorded the mayhem from the church pews when an argument between the family and the pastor carried on as the body of the 54-year-old rested in the open casket nearby.

According to the Hicks family, when they exited the church with the casket the police were already waiting for them outside.

“This was uncalled for and it really hurt me. It really did. To see your loved one come there to rest and to be shut down like that,” Larry Hicks, said the brother of the deceased.

Hicks was baptized as a young girl at the church in Charles County and her family says it’s where she had always wanted her funeral to be held. They also said the cup was innocently knocked over when someone went in for a hug and bumped up against it, so there was no malicious intent to warrant the reaction they received.

“Bad enough we had to bury our own mother yesterday,” said Renetta Baker, another of Hicks’ daughters. “But for you to say she’s a ‘thing’ and there will be no funeral. You’re not a preacher. You’re not a pastor. You’re not a father of the Lord. You’re not any of that. You’re the devil.”

In a statement the Archdiocese said, “What occurred at St. Mary’s Parish this morning does not reflect the Catholic Church’s fundamental calling to respect and uplift the God-given dignity of every person nor does that incident represent the pastoral approach the priests of the Archdiocese of Washington commit to undertake every day in their ministry.”

Church officials are still investigating the incident and have made no temporary or final determination on the fate of Father Briese.

READ MORE: Happy 4th of July? How can we celebrate a country that has always counted Black bodies, but never Black lives?