Happy 4th of July? How can we celebrate a country that has always counted Black bodies, but never Black lives?

The struggle is real ya'll. 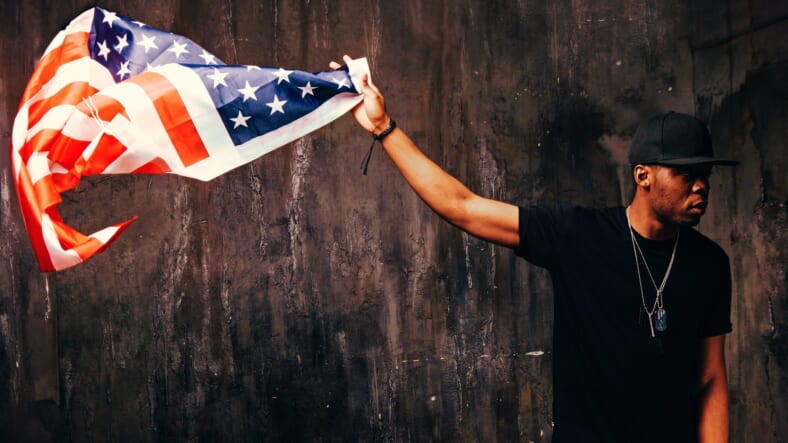 Black Patriotism is the embodiment of the refusal to acquiesce to these outdated notions and continue striving towards true liberation—making the relationship between America’s founding and the Black experience not a marriage built on trust and love, but a dysfunctional union formed in blood and bondage on display within the continued battle for the soul of this nation. (Fotolia)

This year will mark the 231st year of the of U.S. Constitution which made way for America’s independence from Great Britain. Like any other marriage, when your anniversary rolls around people reflect on the the courtship, then the growing pains and eventually how far you have come since inception. There are often two sides to the story of how relationships have evolved over time and quite frankly, if you’re happy, you both can reflect on how you’ve stayed together after all these years.

America’s connection to and kinship with Black Americans however, rifled with its complexities and contradictions, is not so easily analyzed or described.

The simplicity that comes with the celebration of “freedom” and “justice” on the Fourth of July isn’t so much lost on us, but instead absent from the lived experiences of Black folks that still find themselves needing to chant the phrase “Black Lives Matter,” 155 years after we were supposedly set free by the Emancipation Proclamation.

Black liberation is in fact still a work in progress.

With this acknowledgement of our consistent fight for equity, how does Black patriotism fit into the greater scheme of American freedom particularly smack dab in the middle of Donald Trump’s first four years in office? About as seamlessly as Kanye West would at a Juneteenth celebration.

America has never understood Black patriotism because our patriotism isn’t complicit in the fairytale of our founding. The sheer presence of our blackness is the reminder of one of the many original sins of America—which begins with their calls for freedom from religious oppression, and manifests in the “oppressed” becoming the oppressors, building a “New World” on stolen land with stolen lives.

READ MORE: Meet Ayanna Pressley, the Black woman Alexandria Ocasio-Cortez wants us to vote for next

“[A]t the risk of sounding mystical, the first step probably has to be somewhere in the American conscience. The American white republic has to ask itself why it was necessary for them to invent ‘the ni**er.’ I am not a ni**er. I have never called myself one. But one comes into the world and the world decides you are this for its own reasons. And it’s very important for the American, in terms of the future, in terms of its health, in terms of the transformation we are all seeking, that he face this question — that he needed the ni**er for something.”

This IS the question of our founding, and it cannot be separated, part and parceled between servings of Apple pie and fireworks.

In order to establish America, the Founding Fathers concocted a narrative that allowed for white Americans to justify the enslavement of African people, auctioning their lives to the highest bidder. They created a model of government “for and by the people” where their power and representation hinged on the number of Black bodies present in any given state for a Three-Fifths Compromise, but ignored the humanity of those same bodies as they crafted their opening declaration stating, “We the People”—asserting their freedom while condemning Black people to the hell on earth that was American slavery.

How can we stand for a pledge and harmonize to an anthem for a country that has always counted our bodies but never our lives?

White America has always demanded Black servitude, loyalty and praise with little acknowledgment, understanding or acceptance of their role in the creation of an institution that legalized the torture, rape, murder and mutilation of Black bodies in their quest for liberty from tyranny. The reverberations of this institution that allowed White slave masters and mistresses to make property of and sell their own children are still felt today in the racial wealth gap, housing, education, the prison industrial complex, our healthcare system and the list goes on.

This is the history that informs the current occupant of the White House when he entices White NFL Owners to “tame their players.”. His calls to “Make America Great Again” is the white supremacists siren song that revels in the relationship they once had with Black people—that of domination, intimidation and humiliation. White Americans cannot claim that patriotism is the salute to a flag that has been used to suffocate the dreams and lives of so many Black and brown people.

Last month, in a step to reconcile  the past and set a clear path forward the three sitting Black Senators in Congress (Cory Booker, Tim Scott and Kamala Harris) rolled out legislation to make lynching a federal crime. It’s hard to fathom how “the willful act of murder by a collection of people assembled with the intention of committing an act of violence upon any person” as the bill states is not yet punishable as a hate crime, but it is not.

This legislation also comes on the heels of the opening of The National Memorial for Peace and Justice also known as the Lynching Memorial dedicated to the thousands of victims of white supremacy. When Republican Leader of the Senate Mitch McConnell was asked if he would support this bill, his response was enlightening, “Gosh, I thought we did that many years ago. … Honestly, I hadn’t thought about it. I thought that was done back during LBJ or some period like that. But if we need one at the federal level, I certainly would support it,” he said.

Thanks, Mitch. Thanks a lot.

The problem with America is summed up in McConnell’s answer and Baldwin’s statement—until White America decides to “think” about its past and how it has informed our present any celebration of its freedom is a hollow one.

“What is striking is the role legal principles have played throughout America’s history in determining the condition of Negroes. They were enslaved by law, emancipated by law, disenfranchised. And segregated by law; and, finally, they have begun to win equality by law. Along the way, new constitutional principles have emerged to meet the challenges of a changing society. The progress has been dramatic, and it will continue.

The white men who gathered in Philadelphia in 1787 could not have envisioned these changes. They could not have imagined, nor would they have accepted, that the document they were drafting would one day be construed by a Supreme Court which now includes two women and the descendent of an African slave. The credit of “We the People” does not belong to the framers, but to those who refused to acquiesce to outdated notions of ‘liberty,’ ‘justice,’ and ‘equality.'”

Black Patriotism is the embodiment of the refusal to acquiesce to these outdated notions and continue striving towards true liberation—making the relationship between America’s founding and the Black experience not a marriage built on trust and love, but a dysfunctional union formed in blood and bondage on display within the continued battle for the soul of this nation.

There may be two sides to every story, but there cannot be two versions of the truth.

Danielle Moodie-Mills is the host of #WokeAF, a weekly political talk show airing Sundays from 10-1pm EST on SiriusXM Progress.  She is also a staunch social justice and LGBTQ equality advocate often tapped for her expertise on MSNBC, CBC and various networks. Follow her musings @DeeTwoCents.