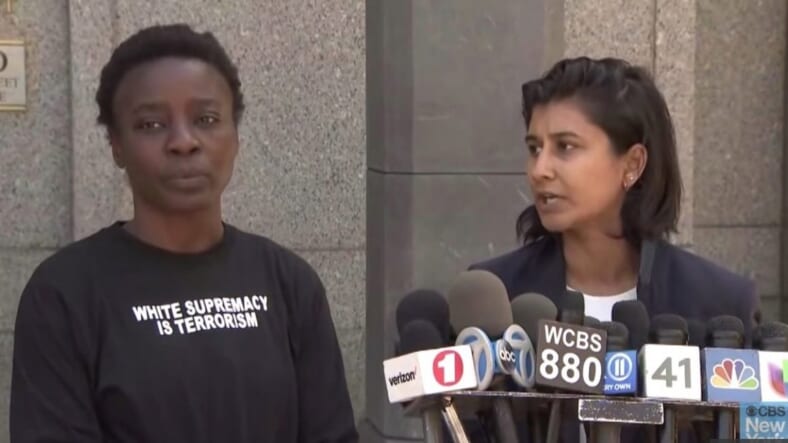 Therese Patricia Okoumou, the soul sister who defiantly sat at the base of Lady Liberty to protest of Trump’s inhumane immigration policies, spoke out for the first time and credited our Forever First Lady Michelle Obama as the inspiration for her Statue of Liberty sit-in.

“Michelle Obama … said when they go low, we go high. And I went as high as I could,” Okoumou said.

The heroic Black woman, who is an immigrant herself, rose up in resistance and climbed the Statue of Liberty on the Fourth of July. The 44-year-year old was arrested and charged with trespassing, interference with government agency functions, and disorderly conduct, reports ABC7.

When she emerged from the court, crowds awaited her and cheered for Okoumou.

“Trump has ripped this country apart. It is depressing. It is outrageous,” she said at a Thursday press conference. “His Draconian zero-tolerance policy on immigration has to go.”

Okoumou, emigrated from the Democratic Republic of Congo in 1994.

While people call Okoumou a hero, prosecutors, say scaling the statute was a “dangerous stunt.”

“(This) alarmed the public and endangered her own life and the lives of the NYPD officers who responded to the scene,” U.S. Attorney Geoffrey S. Berman said.

“While we must and do respect the rights of the people to peaceable protest, that right does not extend to breaking the law in ways that put others at risk.”

On the other end of the spectrum, Trump took the opportunity to slam Okoumou at a campaign rally in Montana, calling the brave woman a “clown.”

“Let’s gets some nets, and let’s wait till she comes down,” Trump said.

Earlier this week Okoumou’s group waved an “Abolish ICE” banner at the bottom of the Statue but members of the group said no one knew of her intentions.

Okoumou was obviously tired of being tired as she waved a “Rise and Resist” tee as well as a “Trumpcare Makes Us Sick,” shirt.

“The person who climbed the Statue of Liberty was one of forty participants in our planned banner action, but her decision to climb the statue was made independently of the group, without consulting any other member of the group. We understand and share her desire to see the immediate release of children from detention and reunion with their parents. We hope that her legal representation will arrange for her release under her own recognizance.”

Okoumou is expected back in court August 3 for a status conference. She faces a maximum penalty of six months in prison and a fine.