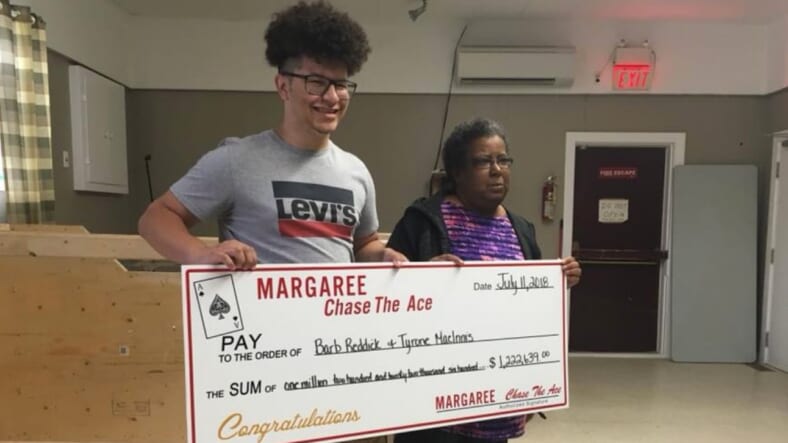 A lot of people like to wonder out loud or with friends and family what they’d do if they won the lottery. Well, a Nova Scotia woman has no doubts and is very clear on that issue.

Barb Reddick is doing everything she can to keep all of the $1.2 million Chase the Ace jackpot announced Wednesday, but her nephew, Tyrone MacInnis, claims half the winnings belong to him, according to The Star Halifax.

But Reddick, 57, says her nephew knows he’s not due any of the money. Reddick tells The Telegraph that she has plans of visiting with a lawyer to see what she can do.

The drama unfolded on Thursday as Reddick arrived at a presentation ceremony for the check, only to find MacInnis, 19, there too. She pulled him outside to tell him to do the right thing and stay away from her winnings, but he refused, she told The Telegraph.

During a photo op in which both are holding up the gigantic check, MacInnis, 19, is smiling widely while Riddick, 57, looks furious.

“I’m taking him to court,” Reddick told The Telegraph. “Now, he’s trying to lie and say I said split.”

The start of the dispute

Reddick said she sent MacInnis out to buy $100 worth of lottery tickets and told him to put his name on them for “good luck.”

“Yeah, he was lucky, but not for half a million dollars,” Reddick told television reporters.

She told The Star Halifax that she never mentioned anything about sharing, half or even splitting the winnings. “I’m not being greedy,” Reddick said. “Tyrone’s like a son to me. I bought Tyrone everything … and he wanted big-ticket items.”

Riddick added that she recently bought MacInnis a car and even sends him money every month to cover college expenses.

MacInnis could not be reached by the news organization.

The Nova Scotia government told the news organization in an email that it has nothing to do with the dispute.

“From our perspective, the prize has been awarded and the lottery is concluded, the Nova Scotia Alcohol, Gaming, Fuel and Tobacco Division said in a statement. “If there’s a dispute between winners, it should be resolved by the parties involved.”