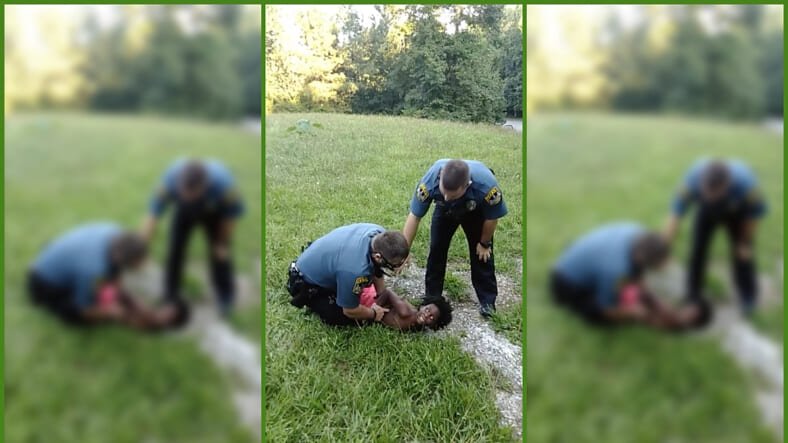 A video has surfaced on Facebook showing Athens-Clarke County police in Georgia pinning down a 10-year-old Black boy who was trying to get to his father. (Courtesy of Facebook.)

Athens, Georgia police are now investigating a disturbing video that depicts an incident between local police and a 10-year-old boy.

Ariel Collins posted the clip on Facebook, which has already received more than 15,000 shares and over 450,000 views. The video shows Athens-Clarke County police  pinning a minor to the ground on July 20th. In the footage two officers are seen holding the boy face down as he attempts to respond to them.

The Athens-Clarke County Police Department released a press release explaining that the child allegedly “lunged at one of the officers” after running past family members in an attempt to speak to his father, who was a suspect sitting in the back of the patrol vehicle.

READ MORE: Black business owner harassed by police after neighbor says he was breaking into his own lemonade business

As he ran towards them, one officer “caught the child in mid-air and the momentum allegedly caused both the officer and the child to land on the patrol car,” the statement said.

When they assessed that the child “continued to be emotionally distraught” about his father, the officers then chose to “place him on the ground,” the statement continued.

The young man’s father had been arrested on a domestic violence charge, and can be heard in the video saying, “I’m sorry” and “yes sir” to the officers as the hold him down.

The responding officers also said in the statement that they were simply attempting to “de-escalate” the situation, “assuring the child was not under arrest and that we would let him up if he would remain calm.” They maintain that once they felt the child was in a more relaxed state of mind, they let him go.

But Monday afternoon, ACC Police Chief Scott Freeman released a statement confirming that he has taken extra precautions by ordering an internal affairs investigation and the release of the officer’s body cam footage.

Here’s the video so you can see for yourself.