The cast of 'Insecure' showed up and showed out an the epic event in Los Angeles. 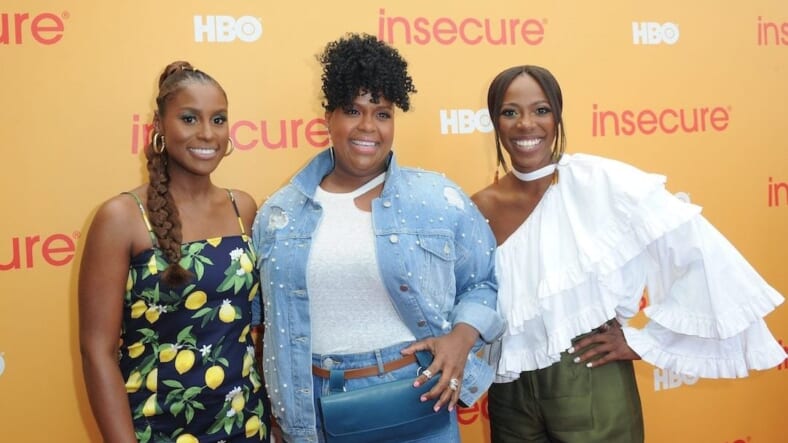 The stars and creators of Insecure showed up and showed out at #Insecurefest in Los Angeles over the weekend and the event was one for the books.

TheGrio was on deck for all the fabulous festivities and even got a sneak peek at the season 3 premiere of the hit HBO series and were treated to five incredible music performances.

While we can’t give up any details of what we saw on the episode, we can tell you to buckle up for a wild ride full of laughs.

Check out all the fun you missed at #Insecurefest and set your DVR for the show’s return to HBO on August 12.

Most of the cast of the Insecure cast walked the red carpet at the star-studded event. Amanda Seales was missing in action, but Yvonne Orji, Natasha Rothwell, Issa Rae, Y’lan Noel, Sarunas Jackson, Neil Brown Jr., and Lil Rel Howery were on deck to celebrate the new season. Noticeably absent was Jay Ellis, who won’t be appearing on the show now that Lawrence and Issa are O-V-E-R.

We spotted Yvonne Orji enjoying some one-on-one time with her bae, Emmanuel Acho.

Aside from getting to see the season 3 premiere of Insecure, attendees also got to see five fantastic musical performances.

Rico Nasty killed her set that included several songs from her album, Nasty.

Amine wowed the crowd with songs like “Spice Girl” and “Caroline.”

After the season premiere played on a huge screen, Jorja Smith hit the stage to deliver four soulful songs.

2 Chainz showed up for a 30-minute set of his hits and debuted a new single from his upcoming album.