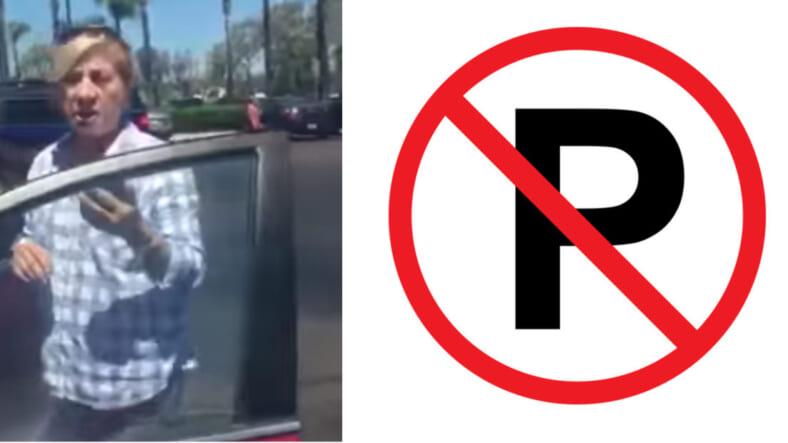 Reportedly, a white woman called the police on a Black woman over a parking space dispute at a Grossmont Centre strip mall in San Diego.

Viral Hog posted the video recorded by the Black woman and provided the commentary she submitted. In the video, an agitated looking white woman can be seen standing next to her car that is blocking not only the Black woman’s vehicle, but also blocking the entrance/exit for the whole lot.

According to the person recording the video, the white woman who is being filmed was upset because she had allegedly been waiting on a parking space and the Black woman “took it.” The Black woman works at the strip mall and was pulling up to her job at the moment of the incident.

“Once I’m parked I have a lady parked directly behind my car blocking me in. She gets out and taps on my back door of my vehicle and began to tell me that it was her parking space and that she was waiting on it. She then sees where I work and threatens to send an email to my corporate office, which she did,” wrote the unidentified Black woman submitted the video.

Apparently, the white woman was upset because she had her mother with her and she needed a handicap spot, but according to the Black woman, the parking space in question wasn’t even reserved for that.

“She told me she had been waiting on the spot because her mother was handicapped and she needed a handicap parking spot, which it was not, there were handicap spots available,” she wrote.  “At this point I am running late for work and do not have time so I call my manager to let her know I will be late. The lady then tells me she is going to call the police.”

It’s at that point that the Black woman begins filming with her camera phone. On the video the white woman can be seen on the phone.

‘She’s calling the police because I’m parked in a public parking spot, that’s awesome,’ says the Black woman in the video. She then says “White America” and the video ends.

But according the Black woman, after she stopped filming, a cop on a motorcycle pulled up as well as a cop car. At this point the Black woman had stopped engaging with the white woman and was walking over to her job.

“I decided to walk back and speak to one of the officers. He asked me what happened and I proceeded to let him know that I pulled into a parking spot and if I could go to work. The motorcycle cop spoke with the lady and asked her to leave and the other cop said I could go,” wrote the Black woman.

This “thing” of white people calling the police on Black people for no discernible reason is not new (technology just brings these incidents to the masses), but it is dangerous. Weaponizing 911 is a vile form of harassment and it must stop.