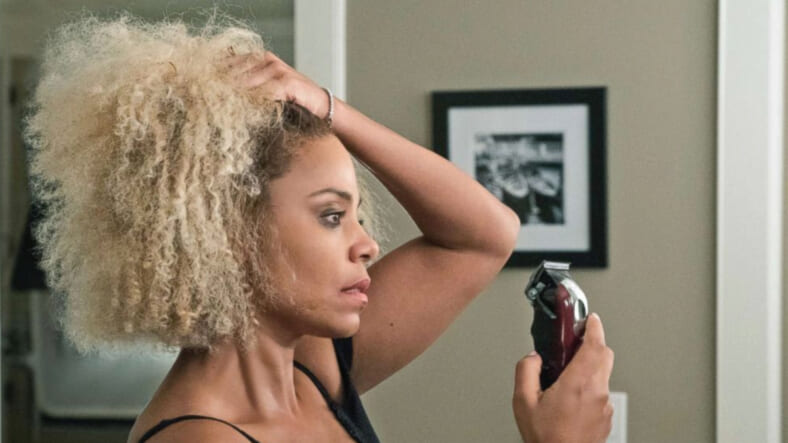 If the response from Black Twitter is any indication, it looks like Netflix has a certified hit on its hands with its new self-love, focused movie, Nappily Ever After.

The trailer for the Netflix original movie based on Trisha R. Thomas‘ best-selling novel of the same name features actress, Sanaa Lathan, staring in the lead role as Violet.

The film, which was shot in Atlanta, follows a successful Black woman anticipating a wedding proposal from her longtime boyfriend. When he refuses to pop the question, she cuts off both her relationship with him and her high maintenance hair. It’s a moment that natural hair gurus call the “big chop” and ultimately leads her down a road of self-discovery.

It appears that life may have imitated art during the production of the film. Lathan, totally committed to the role, shaved her head bald last year, and unveiled her new look on Instagram, as if she too had found a new lease on life.

“I feel so light, I could fly away,” she beamed in the uploaded video.

Many women have had an emotional reaction to seeing their own experiences reflected so honestly, even declaring the film is something ‘young black girls need’.

The clip has even prompted some fans to share their own tales of dealing with their hair issues while living in a world where “nappy” is bad and conventional beauty standards favor European hair and attributes.

‘I’m cryinggggg,” tweeted one women. “Because I literally did this with my hair. Shaving it off is such a life changing experiencing and I’ll never change what I went through.’

Nappily Ever After will debut on Netflix on September 21st. If you haven’t already, you can check out the trailer below.