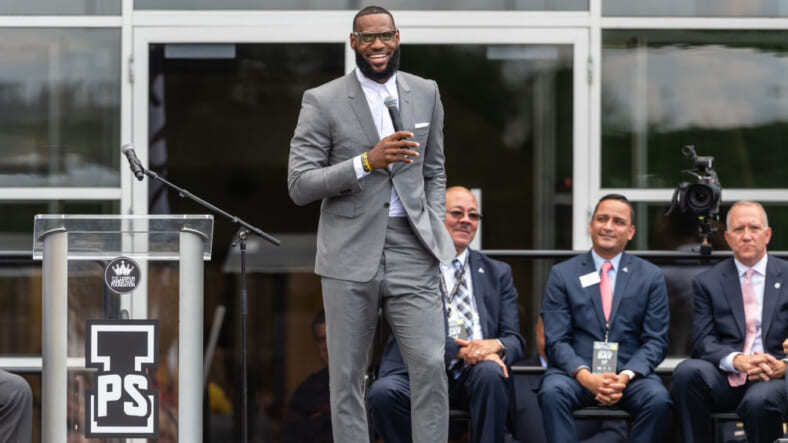 AKRON, OH – JULY 30: LeBron James addresses the crowd during the opening ceremonies of the I Promise School on July 30, 2018 in Akron, Ohio. (Photo by Jason Miller/Getty Images)

LeBron James is a hometown hero and the city of Akron hailed the NBA player for opening the “I Promise” school for at-risk kids, despite the fact that President Donald Trump has publicly gone on the attack and lashed out against the NBA star, reports Raw Story.

“Anyone that’s done what LeBron James has done for the past decade to 15 years for our children to prepare them to flourish in life has to be an intelligent person,” Akron Public Schools spokesman Mark Williamson said on Monday. “He’s a bright guy, end of story.”

James has kept a cool head in spite of Trump’s Twitter tirade calling him and Don Lemon dumb on the heels of an interview that was aired on CNN. During the interview,  LeBron criticized Trump for using sports to divide people.

Trump was in his feelings and tweeted: “Lebron James was just interviewed by the dumbest man on television, Don Lemon,” he wrote. “He made Lebron look smart, which isn’t easy to do. I like Mike!”

READ MORE: ‘I come from a lineage of broken male-female relationships’: Beyoncé reveals how she forgave Jay-Z in Vogue September issue

The LeBron James Family Foundation and the Akron (Ohio) Public Schools teamed up to launch the new elementary school for under-resourced children in his hometown of Akron, Ohio.

Along with the Akron Public Schools and unlike her husband, Melania Trump shared the same good sentiments about James’ achievements.

“It looks like LeBron James is working to do good things on behalf of our next generation and just as she always has, the first lady encourages everyone to have an open dialogue about issues facing children today,” a statement issued by Melania Trump’s spokeswoman said.

Surely James is unbothered and busy getting ready for a winning season as a new LA Lakers player and Showtime just announced a release date long-awaited docs-series from LeBron James the best title.

Shut Up and Dribble will premiere on the network in October and will be a three-part docu-series described as “an inside look at the changing role of athletes in our fraught cultural and political environment, through the lens of the NBA’ according to Deadline.

The title is especially appropriate considering the dustup the phrase caused when Fox News host Laura Ingraham made some severely insulting statements about King James and his activism a few months back.