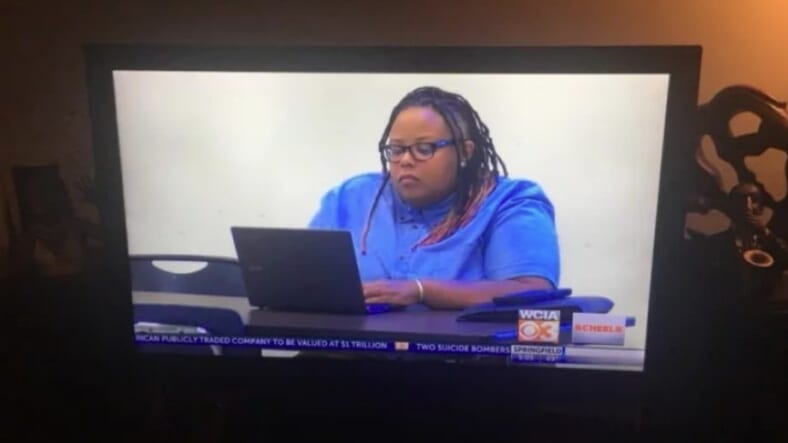 Ja'Naea Modest (Photo: facebook.com)
Many of us know that it’s easier to secure a new job when you’re already employed. But we typically don’t want our current employer to know that we’re seeking greener pastures.

Such was the case for 33-year-old Ja’Naea Modest. The Champaign, Illinois-native tried to secretly attend a job fair during her lunch break from work but ended up on TV and video of the news report has gone viral.

READ MORE: Racist couple attacks Black man with car, threatening to run him over for parking on their street

“I didn’t want my current job to know I was looking for another job. Why the damn news filmed me at the job fair. Smh,” she wrote on Twitter.

According to Buzzfeed News, Modest works for a nonprofit where she aides people with mental and physical disabilities. She’s also a DJ but recently started considering exploring new job options in order to make more money.

“I love my job but I’m trying to move so I need some money,” she told BuzzFeed News.

When she heard about a local middle school holding a job fair, Modest decided to attend and apply for a position, according to the report. She tried to be discreet by hitting up the job fair during her lunch break, but little did she know, the local news was on hand to film the event.

READ MORE: Out of jail, Meek Mill tries to get his former cellmate released

“I finished my shift that morning [and] during my break I hurried and went to change clothes, and went over to the job fair,” she said, adding that after she turned in the application, she headed back to work.

“I was focused on the application — I did not know [the local news] was there. I had no idea what was going on — I came back, changed my clothes, and did the rest of my shift,” Modest explained.

Later that night, however, while visiting a friend, she saw herself on the local news during a segment on the job fair. Modest said it was her friend’s father who first spotted her on TV filling out the job application. He paused the programming before breaking the news to her.

“They did a whole story on the job fair and at some point they zoomed in on me doing the application,” she said.

Modest said a few of her colleagues have joked with her about the situation and surprisingly, no “upper reps” have yet “come to see or talk to me,” she said. “I’m not trying to see them — I’m avoiding everyone like the plague.”

At the time of the post, she’s still employed, and until her direct manager calls her into a closed-door meeting to discuss the situation, Modest said she’s “going with the flow.”