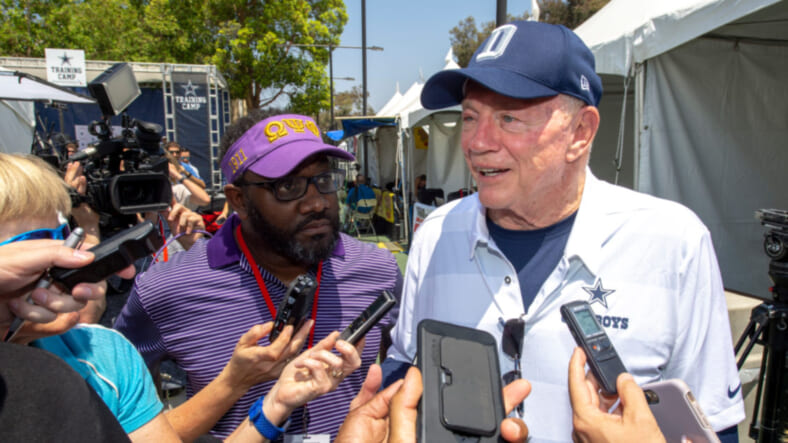 Dallas Cowboys owner Jerry Jones takes questions from the press after the "state of the team" press conference at the start of the team's NFL training camp, Wednesday, July 25, 2018, in Oxnard, Calif. (AP Photo/Gus Ruelas)

The NFL’s preseason kicked off in earnest earlier this week and it was the first time teams around the league began to see how its new – and botched – “Anthem Policy” goes into effect. The policy says those who are on the field must stand for the national anthem, but players can also choose to stay in the locker room.

While four members of the Jacksonville Jaguars chose to do just that, Philadelphia Eagles safety Malcolm Jenkins threw up a Black power fist during the anthem. Dallas Cowboys’ quarterback Rayne Dakota “Dak” Prescott, however, was right there standing proudly, much to the delight of his team’s owner, Jerry Jones.

“I’m so proud of him, just proud of him the way he leads the team, for not letting it mess with their practices,” Jones told TMZ when asked about Prescott, who said during a press conference in late July that the national anthem is “not the time” to protest.

The Cowboys QB, following in the footsteps of people such as Jim Brown, who feel that there is a time and place to protest, and it’s not during the beloved anthem

“I never protest,” Prescott said. “I never protest during the anthem, and I don’t think that’s the time or the venue to do so. The game of football has always brought me such peace, and I think it does the same for a lot of people so when you bring such controversy to the stadium, to the field, to the game, it takes away. It takes away from that, it takes away from the joy and the love that football brings a lot of people.”

Jones, who in the past, has allowed domestic abusers multiple chances on his team, has been out front and outspoken in his opposition to the protests during the national anthem, which are truly meant to highlight police brutality and racial inequality.

Jones told reporters late last month that his team’s policy on the issue is simple: “Our policy is you stand during the anthem, toe on the line.”

After league owners initially voted in May to require players to stand during the anthem or remain in the locker room, including a proposal by Miami Dolphins owner Stephen Ross to suspend players for up to four games for protesting, the league and the NFL Players’ Association – which was not involved in constructing the policy – have agreed to look for a mutually-agreeable solution.

Jones was later told to keep quiet about the anthem issue by the NFL. Prescott, siding with Jones and ownership, has opened him up to rampant criticism and ridicule, particularly from the Black community.

Dallas artist Trey Wilder famously pained a mural of Prescott that resembled Daniel Kaluuya’s character in Get Out. That mural has since been defaced. There has been no word on when the league will have a definitive policy, if any, regarding protests during the anthem.

Here is Wilder talking about mural: