Nicki Minaj’s problem isn’t talent, but her need to subscribe to the worst parts of hip-hop

Nicki Minaj is f**king talented. That is something that even the saltiest of haters seriously cannot deny.

Last Friday, around noonish, Nicki released her long awaited and highly anticipated fourth album, Queen, via a live listening party on her new Apple radio station, appropriately named Queen Radio. The journey to Queen’s release has been nothing but an uphill climb for Nicki, who dealt with numerous leaks and album delays—leaving many to wonder what the outcome of the final project would be based on what many considered poor handling of the rollout.

Nicki confirmed that she was literally working on the track listings in the late-night hours just to ensure that the project was ready for her hyper-vigilant fan base, known affectionately as the Barbs. As the industry continues to shift to the streaming era, with an influx of talented femcee’s taking up some of the space, there was a lot riding on this project for her. It’s also the first release since 2014’s The Pinkprint, which contained her highest charting single to date “Anaconda.”

Luckily, for all of us who have been listening to the album on repeat since its release, Queen, for the most part, has not disappointed—with Nicki making sure that everyone knows that her throne is still intact.

Nicki stresses the importance of her legacy, and dominance as a chart-topper over the last decade—reinforcing the point that a lot of folks in the industry claim titles without the body of work. The opening track “Ganja Burns” is smooth, calm and collected, giving a seemingly tropical vibe. It’s a great set up for the second track, “Majesty,” which features Eminem, whose flow is one of the best we’ve heard in a very long time, with Nicki never losing a step. on “Barbie Dreams,” Nicki unleashes vicious rhymes and metaphors, coming for as many rappers, actors, producers and athletes she could squeeze within the 4:39 song, which samples Biggie’s “Just Playing (Dreams).” She quickly switches up her flow multiple times on the album—a style she has done effortlessly throughout her career.

Here’s where things get problematic: on “Barbie Dreams,” you’ll hear lyrics like…

“used to f**k with Young Thug,
I aint addressing this shit,
I caught him in my dressing room stealing dresses and s**t.”

Her ex, rapper Meek Mill was also in the scope of Nicki’s bars, as she rapped:

“Meek still be in my DM’s,
I be having to duck him,
I used to pray for times like this,
Face ass when I f**k him.”

“Barbie Dreams” was trending at number one within minutes of the album’s release, as Nicki unloaded everything off her chest, all in jest of course, as she later confirmed on Twitter.

Even in jest though subscribing to homophobia and misogynoir is never okay.

Queen follows her extremely questionable decision to work with convicted pedophile 6ix9ine on the track FEFE. Nicki who once tweeted, “And for the record on sum serious sh*t, I believe people who abuse children should be stoned to death in public the end.”

And for the record on sum serious shit, I believe people who abuse children should be stoned to death in public. The end.

This left many of us in her fan base scratching our heads on her feelings around sexual abuse. Let us not forget that her brother, Jelani Minaj was recently convicted of raping a 11-year-old girl. Her decision to work with 6ix9ine brought back awful suspicions around the “Queen of Rap’s” politics.

Nicki unfortunately continues to subscribe to some of the worst parts of rap music, never shying away from homophobic and misogynoiristic lyrics, or working with problematic artists despite her fan base being largely queer and women. Years ago, she rapped on a song called, “Dead Wrong” with the lyrics, “first they love you then they switch, yeah they switch like faggots,” for which she has been criticized and rightfully so.

Years later, she has evolved into using lyrics on Queen stating, “they switching like sissies now, you ni**as is iffy” and the shot to Young Thug about “stealing dresses” continues to push the agenda of homophobia within the rap community. 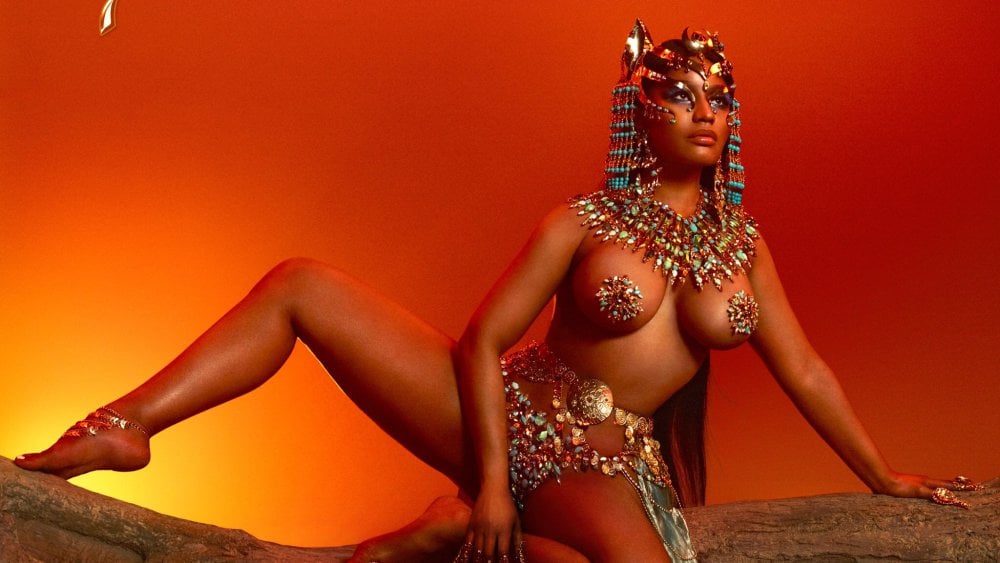 These days, we have a hip-hop community that is continuously growing more queer in visibility and acceptance with artists like Young MA, Azealia Banks, and Mykki Blanco—yet there continues to be unwavering support of artists like Nicki. This is the same woman who once identified as bi-sexual (which was seen more as a publicity stunt than anything else) has seemingly left that moniker for the regality of being a queen—one that is only meant for a King, all based in patriarchal heteronorms.

On the song, “Ganja Burns,” Nicki returns to that trite idea correlating her abstaining from sex, and not “lending” her body to being something that “queens” do—reminiscent to many of the off-color statements she made in her recent Elle magazine interview.

Nicki was once the girl with hits like “I endorse these strippers,” now she is relegated to taking shots at other women with lyrics on Queen stating “I ain’t never played the hoe position, I ain’t never have to strip to get the pole position.” Many people feel like she is either targeting Cardi B or Eve. At this stage in her career, it’s just unnecessary and counterproductive to a culture that already turns women into villains (like sex workers) while glorifying men who do the same thing.

Despite some of the content being rightfully called out on Twitter for being misogynistic, homophobic, and even fatphobic, Nicki still continues to reign supreme within totality of the industry that will never cancel folks who subscribe to those tactics. Now, four albums in, she has rightfully secured her spot as a legend in the industry with the ability to switch up her flow and keep up with the best in game—often over shining when placed on tracks with her male counterparts.

Where Nicki reigns supreme will always be in her ability to be unapologetic in her rhymes, witty metaphors, and her skill set to switch her flow multiple times throughout a track. She is one of the best to do it. However, as good as Queen is, it still leaves you hungry for more or perhaps, thirsty for something else.

Nicki should use this time to explore her craft and not be overly concerned about big hits. Can she elevate  herself beyond this paradigm? Only time will tell.

For now, Nicki’s will continue to sit on the thrown with her crown slightly tarnished and askew.