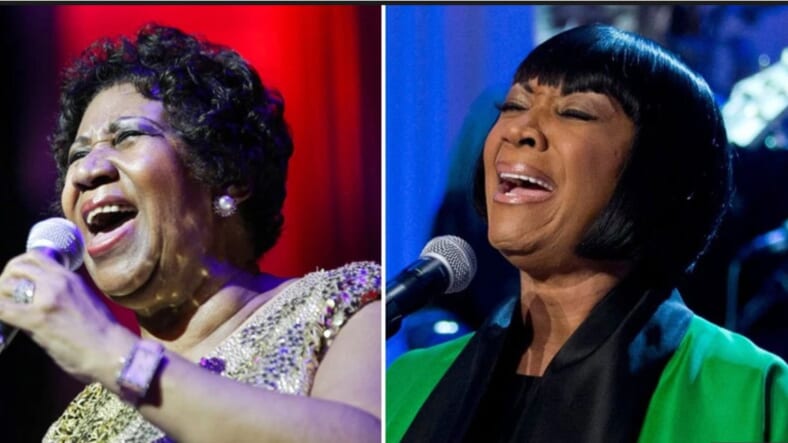 Even though they have both publicly denied it over the years, it has been rumored that Aretha Franklin and Patti LaBelle have feuded for years. (Courtesy of Getty)

Before Brandy and Monica battled over which one could claim the boy was hers and before Mariah and J.Lo tried to figure out who knows whom, there was the alleged legendary beef between two formidable divas, Patti LaBelle vs Aretha Franklin.

Even though they have both publicly denied it over the years, the two powerhouse singers have for eons been rumored to have a pretty disharmonious relationship leading some fans to consider them musical rivals.

But the LaBelle’s sincere and moving tribute to the late “Queen of Soul,”  who died on Thursday at age 76, was full of love and remorse.

“I am deeply saddened about the passing of the Queen of Soul and my sister in song, Aretha Franklin,” LaBelle wrote in a statement posted to Twitter. “Today the world has experienced a tremendous loss. Aretha was a rare treasure whose unmatched musical genius helped craft the soundtrack to the lives of so many. My sympathy, love and prayers go out to her family, loved ones and fans around the globe.”

This statement was a far cry from the decades where the two women were pitted against each other. The most notable incident occurring in 2014, when Franklin appeared to snub LaBelle at the Women of Soul concert at the White House in 2014 by refusing to shake her hand when she offered it.

LaBelle playfully downplayed the incident to Andy Cohen on a subsequent episode of “Watch What Happens Live,” where she insisted that she “didn’t see” the snub (despite there being a video of it) and joked that whomever Lady Franklin brushed by “wasn’t me.”

Soul queens Aretha Franklin and Patti Labelle were both were invited to perform for an audience at the White House for the latest In Performance At the White House, celebrating Women of Soul. Did Aretha not see Patti? You be the judge.

“I don’t know who the lady was,” LaBelle told Cohen. “I just know she had on a green coat.” Fact check: LaBelle was wearing a green coat.

The same year, Franklin clarified, “Patti and I are cool and we always have been,” in response to a false gossip story claiming that the pair had actually physically brawled.

In the end, LaBelle’s sentiments about her sister in song are really all that matters.

My thoughts, my heart and my prayers are with Aretha Franklin, the greatest singer of all time, and all of her loved ones right now. ❤