Aretha Franklin Tribute: A definitive list of who should (and should not) be invited to perform 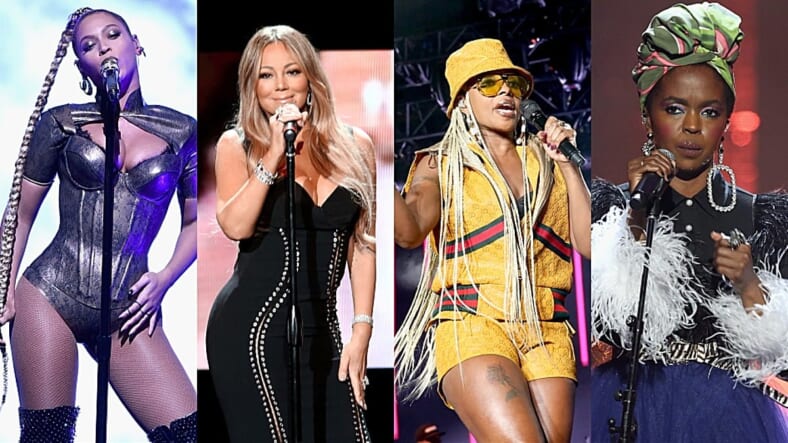 Who should be invited to the Aretha Franklin tribute? Beyonce, Mariah, Mary J, or Lauryn Hill? You decide. (Courtesy of Getty Images)

Yesterday, Grio fam, we lost our Queen of Soul.

It’s easy to loosely throw around the word “legend,” but any woman R&B artist who made her debut within the last half century will openly admit to owing a debt of gratitude to Ms. Aretha Franklin.

With the death of any revered artist, comes to the obligatory requisite tributes, often taking form at music awards shows. As we saw following Prince’s untimely death in 2016, while every tribute may have the best of intentions, not every tribute will have the best  results (I know that she just celebrated her 60th birthday, but I’m looking at you, Madonna.)

A Franklin tribute will undoubtedly be included in every televised celebration of music occurring in the next year; I’m sure MTV is scrambling to add one to the August 20 telecast of its Video Music Awards. If any of you who are reading are responsible for culling a lineup for tributes, please consider the list below:

SHOULD: Beyoncé: This one’s pretty obvious, as most people consider Beyoncé the equivalent R&B queen for this generation. Beyoncé and JAY-Z already dedicated the Aug. 13 Detroit stop of their “On The Run II” tour to Franklin shortly after news broke of her illness and impending passing, and I doubt anyone would be mad if the woman who created “Single Ladies” hopped on stage and knocked out “Respect.”

SHOULD NOT: Mary J. Blige: Look, I love Mary J. as much as the next person, but despite decades of measurable success, octaves with high numbers have simply evaded Mary J. In fact, I’d argue that the greatest trick the devil ever pulled was convincing the world that she could sing. Her voice would go bye-bye attempting anything from Franklin’s oeuvre. I welcome all your stones.

SHOULD: Whitney Houston hologram: If I had to think of one vocalist who I’d want to hear replicate Franklin’s mezzo-soprano, it would be the late great Whitney Houston. I’m not saying I’m a fan of the hologram performance “trend” kicked off by Tupac at Coachella in 2012, but since people are talking about sending the hologram of  rapper Chief Keef on tour, the least we can do is employ the hologram of a talented artist to give props to Franklin.

SHOULD NOT: Mariah Carey: It’s gauche to outright diss a legend who can’t do what they used to do only because of age. I know that someone somewhere will inevitably suggest Mariah Carey hop on someone’s stage for an Aretha medley, when the truth is that Carey should hang up those pipes for good. Have we all so quickly forgotten her galactically disastrous New Year’s Eve performance in 2016,  cause I haven’t. She’s richer than God and has nothing left to prove…it’s okay to bow out.

SHOULD: Franklin’s living contemporaries: Sure, Franklin was known for her cantankerous behavior and the little diva wars she had going with a number of female singers, but this is the time for everyone to dust it off and show love. I would absolutely stay glued to my couch with the Sonos Sound Bar cranked up for a medley of Franklin songs from the likes of Gladys Knight, Dione Warrick, Patti LaBelle, Tina Turner and Chaka Khan.

SHOULD NOT: Any white woman: Aretha was an unapologetically Black woman from Detroit. She oozed negritude and her connection to the Civil Rights movement is beyond reproach. For that reason, no one of the Caucasoid persuasion should tackle her music publicly—at least for the moment.

I had originally had this as “any white woman not named Christina Aguilera,” but even Xtina should sit this one out. Not forever – just right now.

SHOULD: Anita Baker: I haven’t watched or heard Baker perform in a very long time and she’s apparently on her way out of the music game for good. Anyone with functioning ears who was alive in the 1980s and 1990s has long known that Baker and Franklin belong in the same breath as revered Detroit songstresses. She should hold off going into retirement until she’s done at least one tribute.

READ MORE: Trump messes up Aretha Franklin tribute by saying the Queen of Soul once worked for him

SHOULD NOT: Lauryn Hill: Under normal circumstances, I’d love to see Ms. Hill get her Sister Act 2 on and hit a stage in service of giving the Queen her props. But she’s spent the last few years burning so much of the capital she’s built with her fans that her otherwise good name has become something of a punchline. I mean, by the time she showed up for any live tribute show, we’d be mourning the death of Franklin’s grandchildren from natural causes. If she does wind up landing an awards show, I’ll know to extend the DVR recording by at least an extra hour.

Check out this 2011 attempt of an Aretha Franklin tribute on the Grammys. Yea, no bueno.