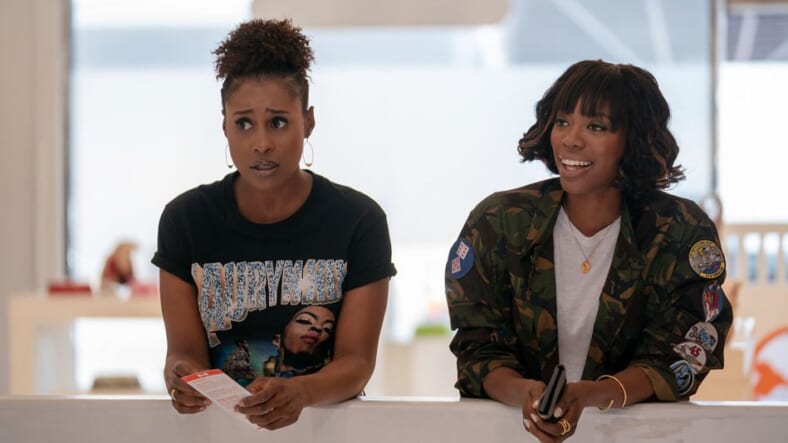 Episode 3, titled “Backwards-Like”  in season 3 of Insecure has Issa (Issa Rae) at a couple of different major crossroads: She’s eyeballing better gigs with a mind on leaving We Got Y’all, and she’s considering (and ultimately accepting) a part-time property manager job that we all know she’ll suck at but offers her dramatically discounted rent. And, of course, she makes a decision regarding Daniel’ (Y’Lan Noel).

The season will hopefully ramp up from its slow start, considering we’re (maybe) done with Issa and Daniel’s ) will-they-or-won’t-they dynamic: Issa finally gets what she thought she wanted by the conclusion and…discovers it’s not what she wants after all. Not dragging out their shit is a very wise move on the writers’ part, I surmise.

As with many episodes of Insecure, this one was full of valuable lessons. Here are the four of the biggest ones:

1. Hard to Focus on Your Career When Your Homelife is Messy
Ask any human couple who has done it for more than, say, six months: Cohabitation is not to be taken lightly. When Daniel suggests Issa stay in his crib a bit longer just one episode after he’s trying to push her out, it seems like he’s speaking for Little Daniel instead of focusing on the reality that he should see clearer than anyone else.  Issa is trying to get her shit together, and their whatever-tuationship is nowhere near powerful enough to endure that, especially since he also has to get his own shit together. It’s hard to focus on your grind if you’re going home to drama every night.

I’m glad Issa made the decision for both of them, because another episode of this would’ve been grating. Also (and I might catch some darts for this), that whole “stay in bed with me because it’s more comfortable though we’re not boning despite a clear mutual attraction” bit is not grounded in any reality that I’m aware of. It always ends up just as it did in the last scene of the show.

2. When Your Boys Hate on Your Career Moves, Cancel Them Swiftly
Daniel’s frustration with Khalil (Aaron Jennings) in episode 2 seemed mostly like internalized hatred. But this time around, Khalil competes directly with Daniel for the attention of rapper Spyder (Roshon Fegan, whom I had to Google to see if I’m okay with him dropping the N-bomb so often – his dad is Simon from The Meteor Man, so it’s cool). Khalil dropping the façade of homie-ness in his attempt to get shine over Daniel is grounds for immediate dismissal. Dude-friends don’t do that shit to each other.

3. Don’t Walk in to a New Gig Acting Too Familiar, No Matter What
Molly (Yvonne Orji) secures a new job at a Black-owned law firm, Haywood & Associates. She immediately starts comporting herself like she’s at the beauty shop, which isn’t a good look at most businesses, but especially the still buttoned-up legal world. Yass-sista-girl-ing your colleagues requires time and familiarity, and it blows up in Molly’s face because she immediately develops the reputation of complaining about how better things were at her old firm. Corporate America is still corporate America regardless of melanin levels…something Molly should know at her age and stature in the legal community. It’s interesting to watch her get caught up doing something similar to what she cautioned the Black intern against in season 1.

READ MORE: 5 things to expect on season 6 of ‘Married To Medicine’

4. Turning Your Nose Up at Black Businesses is Never Cool
Molly complained to her girls about how Haywood & Associates still uses couriers, keeps lots of documents in the office and is, in general, not as “advanced” as her white-owned former firm. What most of the audience doesn’t know is that the number of Black partners in white firms is still absurdly low and the number of Black-owned firms is lower still. Thus, conflating her new gig with raggedy Black-owned businesses is either bad writing or Molly really is an ultra-elitist punk. I appreciate that Issa and Kelli (Natasha Rothwell) got on Molly and Tiffany (Amanda Seales) for ragging on Black businesses, because things were getting dangerously close to that wack-ass conversation about oral sex from season 2.

A Few More Thoughts on the Episode:

–       Tiffany as the bougie, pretty, light-skinned character has to make a few LSN sistas feel some type of way. Between her and Dro, why do they have us out here like this??

–       I’m thinking the dude from Beat Crew might be Issa’s next love interest. Imagine all the keyboard hate Issa Rae would get if she went the distance with the Sorta Rican dude!

–       I can maybe let a few crumbs in the bed slide. But that huge pile of Flamin’ Hot Cheetos under the pillow in Issa’s dream…? That’s an automatic firing.

–       I’m interested to see what they do with Daniel’s chase after “real” musicianship. I get the feeling he’s fighting an uphill battle in a world of face-tatted Auto-Tune rappers.

–       Molly affording to get bougie haircuts for her dog while her very best friend Issa is perpetually in struggle mode is so real I would’ve felt attacked 10 years ago.

–       “So Y’all just gonna Greek chorus on a bi—h” is the funniest line of the episode, especially because Issa really, really needed to hear that shit.