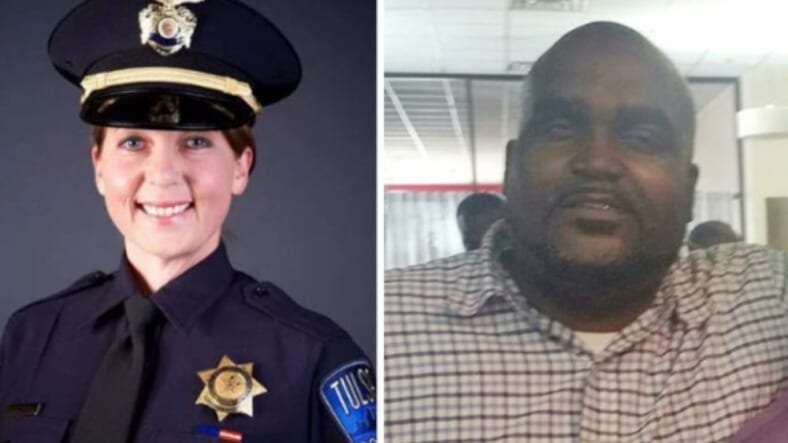 Community members in Tulsa, Oklahoma are outraged after learning former Tulsa police officer Betty Jo Shelby, who was acquitted of first-degree murder in the death of Terence Crutcher, is planning to teach, the Black Wall Street Times reports.

We The People Oklahoma is urging the Sheriff’s Office to remove Shelby from a CLEET-approved class set for Tuesday, August 28th.

On Monday, the group, along with Aware Tulsa, will hold a noon rally near the Tulsa Courthouse, according to Newson6.

Shelby fired the fatal shot in 2016 that killed Crutcher as he was waiting for assistance for his truck that had broken down so it’s pretty ironic for her to teach a course about how cops can survive.

Crutcher can be seen in video footage walking away from the officers with his hands in the air before he is shot in the chest.

Shelby said she fired her gun because she was in fear for her life at the time. She felt Crutcher was reaching into his SUV for a gun, though no weapon was found in his vehicle. Crutcher’s fatal shooting was captured on video taken from a police helicopter and a dashboard camera.

Shelby was on paid leave during her trial and was among several other officers who were permitted to return to work after being accused of excessive force. She was eventually acquitted in May 2017.

Shelby now serves as a deputy for the Roger’s County Sheriff’s Office.

Although a jury determined she should never be a patrol officer again, she has been hired to train Tulsa law enforcement officers on how to manage a similar incident. Activists say that the decision to hire Shelby shows a deep disconnect with the community, according to reports.

TCSO Spokesperson Justin Green says the class is about the experience an officer goes through.

“The stresses you may go through, the potential for facing charges for doing your job, things of that nature,” Green said. “This class is not about that particular incident.

“By bringing Betty Shelby to Tulsa and having her speak at the Faulkner Building is a slap in the face to all African Americans,” he said.

The group also released a statement:

“Deputy Betty Shelby, 44, has presumably been selected to teach this course, which allows for 4 CLEET hours including 2 crucial required mental health hours, because she is the former Tulsa Police officer who shot and killed an unarmed 40-year-old black man, Terence Crutcher.

We The People Oklahoma seriously questions both the judgment and motives that the Tulsa County Sheriff’s Office would have in allowing Deputy Shelby to direct such a crucial course.

After all, Shelby herself shifted the blame from Crutcher’s death both to police training videos and, shockingly, Crutcher himself.

Although she was ultimately acquitted, jurors cautioned in a letter that they found Shelby wholly unfit to ever serve as a law enforcement officer.”

After Shelby was acquitted she requested that her record be expunged District Judge William LaFortune ruled that the first-degree manslaughter case would be removed from her record, with the documents related to the case sealed except by court order.