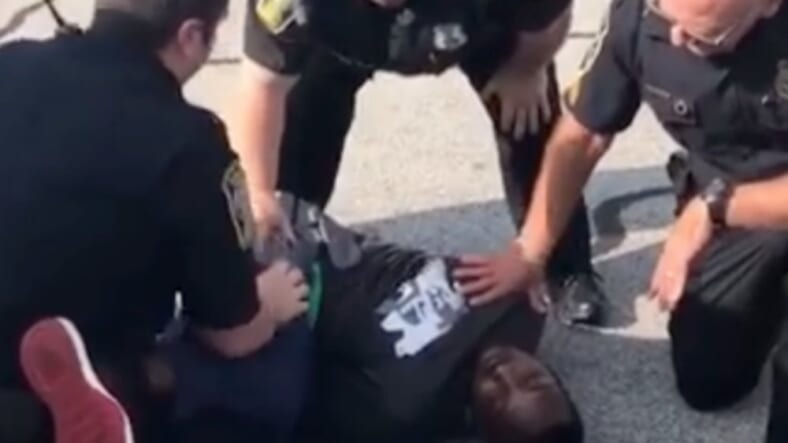 The attorneys for Desmond Marrow, the former college football player who was choked out and slammed to the ground by a Georgia cop, says that Henry County officials are trying to shut him up by bringing forth charges eight months after the fact.

Marrow’s attorneys say this is retaliation. The Georgia police officer David Rose seen in a viral video last year choking Marrow was fired after an investigation determined that he used excessive force while Marrow was in handcuffs. The brutal assault occurred after police officers responded to an alleged road-rage incident involving Marrow and a video of the incident was shared widely on social media.

The disturbing video showed Marrow lose consciousness as police officers violently wrestled him to the ground and choked him.

Rose can be heard on dashcam video telling fellow officer Matt Donaldson, “I’m not gonna write it down but hell yeah, I choked that (expletive).”

The same day, Henry County District Attorney Darius Pattillo said Marrow would not be charged and would not face felony charges or misdemeanor charges. Instead the case would be turned over to the county solicitor general for review.

But Stewart said Monday it was all a ruse.

“We saluted that department for taking immediate action because it’s so rare,” Stewart told reporters. “Sadly, that wasn’t the truth of what happened.”

In a lawsuit filed Monday in Henry County State Court, Marrow’s lawyers contend the officers violated his rights and that police and he said elected officials conspired in “a clear attempt to silence Mr. Marrow.”

Bettis however said after a four-hour meeting with a citizen panel to review, they agreed on the charges.

Stewart said emails show that the county worried about protests and said the case “almost went away” and they worked to get it swept under the rug.

Stewart claims then-Major Mike Ireland falsified the police report by writing that he reviewed Rose’s in-car video, a second video shot by a citizen, 911 calls, witness statements and the officers’ reports and found that the officers complied with policy. The placement of Rose’s hand on Marrow’s neck “does not appear to be intentional,” the report states.