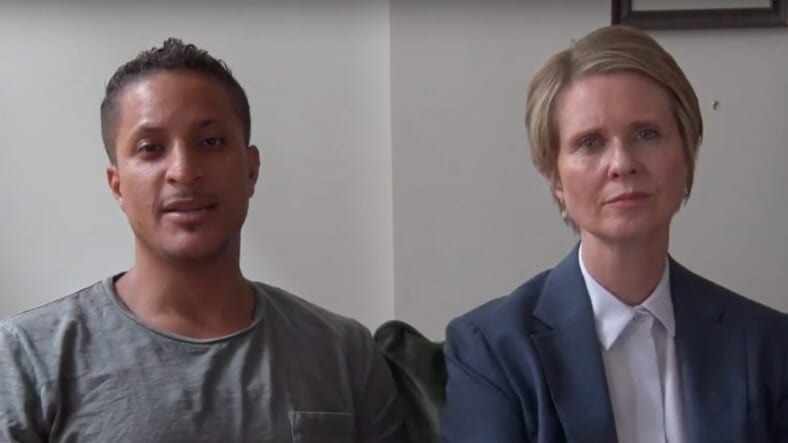 Akeem Browder, brother of Kalief Browder who committed suicide after being abused while wrongfully imprisoned for three years on Rikers Island, has officially endorsed Cynthia Nixon for governor of New York.

The August 27 press release from Nixon’s campaign includes a link to a video with the pair speaking on issues that the Browder family prioritizes, specifically the cash bail system. Kalief Browder, a teenager at the time, languished in jail for three years awaiting trial about a stolen backpack because he could not afford the $3,000 bail.

His case was ultimately dismissed, but only after Kalief had already been physically assaulted by guards and inmates and placed in solitary confinement for the majority of his three years at Rikers.

“Governor Cuomo looked me in the eye and told me that he would pass policies to ensure what happened to our family would never happen again, but he failed to deliver,” says Akeem in the video. “I’m endorsing Cynthia Nixon because we need a governor who will actually fight to dismantle our system of mass incarceration and build a system based on freedom and justice for all.”

“Today thousands of New Yorkers are languishing in jail awaiting trial because of a cash bail system that punished people for being too poor and too black. Tonight those people will be sleeping in cages, and Harvey Weinstein who can afford his $1 millions bail will be sleeping in his own bed. That’s not justice.”

The press release was not without its hiccups though. Capital Tonight reporter Nick Reisman captured a screenshot of the initial press release that made the tragic mistake of calling Akeem Browder by his deceased brother’s name multiple times.

This press release from the Cynthia Nixon campaign touts the endorsement of Akeem Browder and then refers to him on subsequent references as Kalief, his deceased brother pic.twitter.com/nDmtTvkdCz

READ MORE: Security guard allegedly caught having sex with the corpse of a woman arrested

The former Sex and the City star is seeking to unseat Andrew Cuomo, the Democratic incumbent.

Watch the video of Cynthia Nixon and Akeem Browder below: