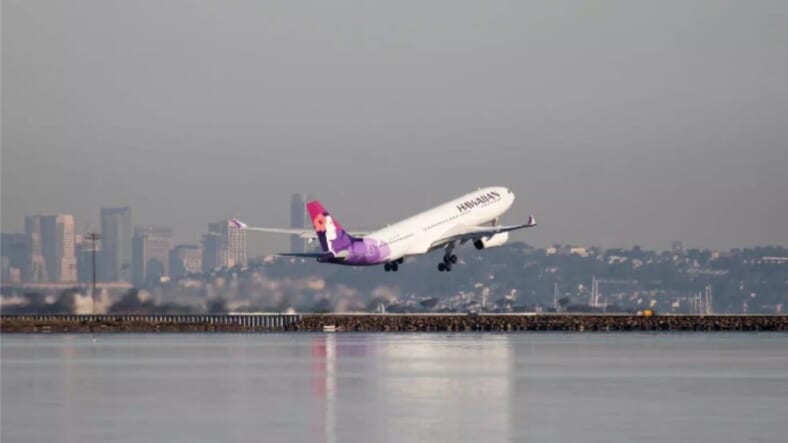 Over a dozen people aboard a Hawaiian Airlines flight had to seek emergency medical treatment after a can of pepper spray went off inside a plane headed from Oakland, California, to Maui.

According to Newsweek, twelve passengers and three flight attendants were treated for respiratory issues when the plane eventually landed at the airport in Kahului, Hawaii.

The Associated Press reported that the incident came after a 90-minute delay to take off caused by a passenger accidentally sharing gruesome photos from a fake crime scene with  his fellow travelers via Apple’s AirDrop. The flight was carrying 256 passengers and 10 crew members when the pepper spray—brought onto the plane illegally—went off, airline spokesman Alex Da Silva said.

Passenger Nicholas Andrade recalled, “I was woken up by someone having a coughing fit. But what I came to find out is that it wasn’t one person coughing, it was many people coughing. And then everyone was coughing and then we were coughing. And the flight attendants were covering their faces and passengers started covering their faces.” He added, “People were definitely panicked.”

The aircrew was alarmed when passengers began to suffer from coughing fits and had trouble breathing. Flight attendants told the affected to move to the back of the plane where the air wasn’t toxic. About 40 people stood in the back galley for about a half-hour until the air around their seats improved, Newsweek noted.

Andrade said the accident left him feeling light-headed and with a headache. His fellow passengers also reported their burning and watering eyes.

The airline did not provide any information about the passenger responsible for bringing the cannister onboard but Transportation Security Administration spokeswoman Lisa Farbstein told AP that the agency and local police are investigating the incident.

The pepper spray held around 1.5 ounces of gas, and Farbstein explained that the fine for bringing it onto the place could be as high as $1,960.