The team's wide receivers Kenny Stills and Albert Wilson were the first players Sunday to kneel in protest during the regular NFL season. 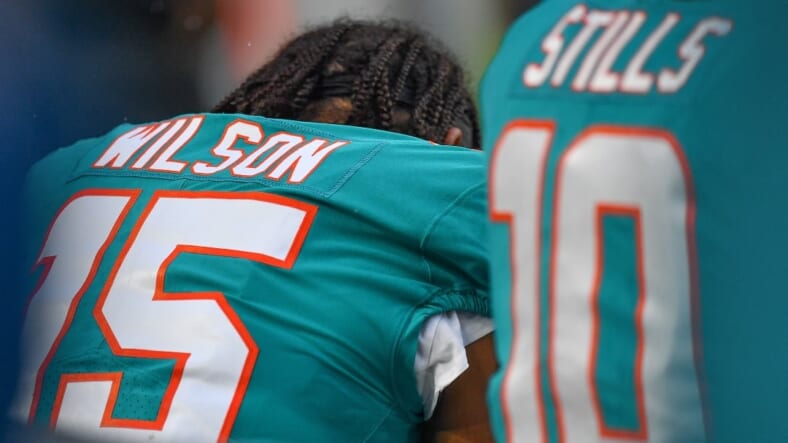 Albert Wilson #15 and Kenny Stills #10 of the Miami Dolphins sit on the bench during the National Anthem before the preseason game between the Miami Dolphins and the Baltimore Ravens at Hard Rock Stadium on August 25, 2018 in Miami, Florida. (Photo by Mark Brown/Getty Images)

As the country buzzes about Nike’s decision to back former pro-football player Colin Kaepernick and his decision to take a knee during the national anthem, two Miami Dolphins wide receivers became the first NFL players to do so in Week 1 of the season, USA Today and other news organizations are reporting.

Kenny Stills and Albert Wilson kneeled during the anthem before Sunday’s game against the Tennessee Titans. While Stills and Wilson knelt, a third player, Dolphins defensive end Robert Quinn, raised a fist.

Stills and Wilson also kneeled during the preseason and said they have no plans of changing this, USA Today reported.

Stills, however, did say he would reconsider if Kaepernick, a former quarterback for the San Francisco 49ers, and former 49ers safety Eric Reid, were to be signed by a pro team, according to USA Today. Kaepernick and Reid have filed grievances against the NFL. Kaepernick began taking a knee in protest of police misconduct.

“It shouldn’t be this complicated,” Stills told The New York Times. “Instead of people saying, ‘Yeah, let’s do this, let’s make change, let’s make our country a better place,’ it’s like, ‘no, don’t do this … this isn’t the right place. You don’t like the police.’”

Kaepernick took to Twitter to commend Stills and Wilson, posting, “My brothers @Kstills and @ithinkisee12 continue to show their unwavering strength by fighting for the oppressed! They have not backed down, even when attacked and intimidated. Their courage will move the world forward!”

My Brothers @kstills and @ithinkisee12 continue to show their unwavering strength by fighting for the oppressed! They have not backed down, even when attacked and intimidated. Their courage will move the world forward!

“Love is at the root of our resistance!”✊? pic.twitter.com/2kSsX4s7EU

The NFL remains without a decision or an official stand or policy regarding taking a knee during the anthem – and that is how it will stay, according to Newsweek, citing an ESPN report.

The league will not put a new policy in place this season, Newsweek reported.

“The new policy is going to be no policy,” Newsweek quoted sports journalist Adam Schefter as saying.