Rapper T.I. says Cynthia Nixon is invited to the cookout after she calls out racist marijuana laws

The rapper said he didn't know who the actress was, but he's feeling her agenda. 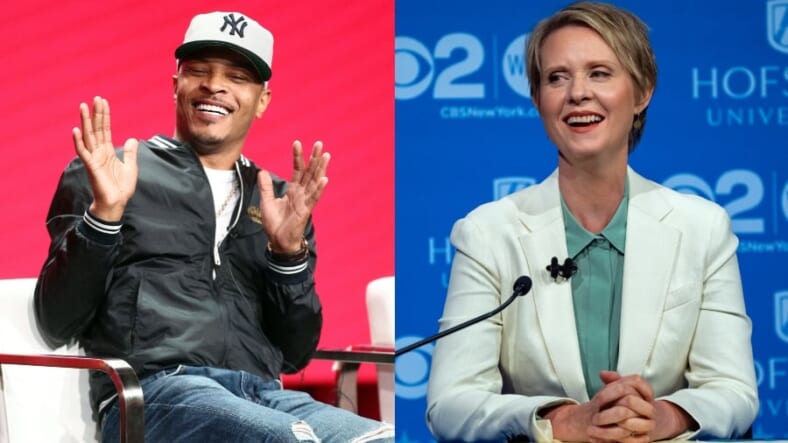 The outspoken artist took to Twitter on Monday to praise Nixon after watching her impassioned plea to legalize marijuana during a Democratic gubernatorial debate against New York Governor Andrew Cuomo, in a clip from Aug. 29:

“I have no idea who this brilliant lady is…” he tweeted. “But she’s invited to my next bbq/family gathering and if she’s running for anything…ANYTHING I SAY..She’s got my vote!!!Right on to the Righteous Decent White People out there,using their privilege to make a difference!!!#USorELSE”

I have no idea who this brilliant lady is…But she’s invited to my next bbq/family gathering and if she’s running for anything…ANYTHING I SAY..She’s got my vote!!!Right on to the Righteous Decent White People out there,using their privilege to make a difference!!!#USorELSE✊? pic.twitter.com/lZkV7K1cIe

Nixon got heat from some black activists early in her campaign after calling for “reparations” for Black communities impacted by the war on drugs, but she stuck to her message during the debate:

“I think it’s very important that we legalize marijuana in New York State. Eight other states have done it, plus the District of Columbia,” Nixon argued. “There are a lot of reasons to do it, but first and foremost, because it’s a racial-justice issue. People across all ethnic and racial lines use marijuana at roughly the same rate, but the arrests for marijuana are 80 percent black and Latino.

“When this multi-billion dollar industry comes to New York, we need to prioritize the individuals and communities who have been most harmed by the War On Drugs,” she continued. “We need to parole people who are in jail for marijuana arrests.”

While Nixon is considered the underdog in the race against two-term Governor Cuomo, her views on marijuana are popular.

According to a Pew Research Center poll, 61 percent of Americans favor legalizing marijuana (almost double the support since 2000).

The ACLU also reports something we already knew- Black people are almost four times (3.73) more likely to get arrested for marijuana usage, than white people.

T.I.’s endorsement may or may not help Nixon gain some popularity with voters, but at the very least, his tweet, which received tens of thousands of hearts, raises an issue worth discussion.

If we all know the War on Drugs left casualties in Black and Latino communities– who else besides people of color will fight against the damage done?

For people sitting behind bars right now over these injustices, every person counts.