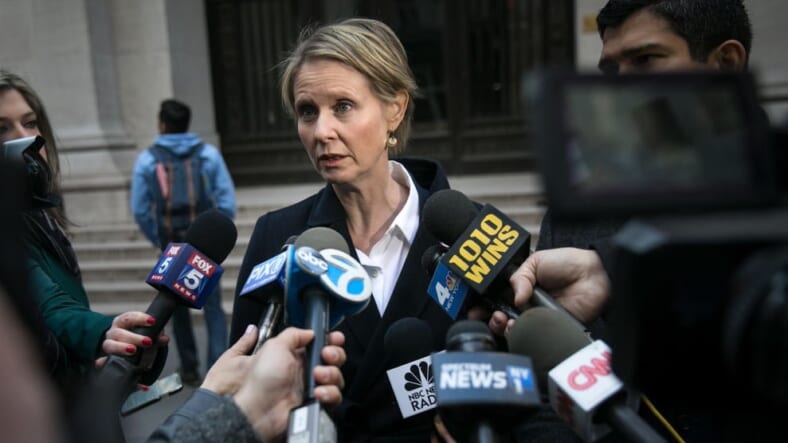 New York gubernatorial candidate Cynthia Nixon speaks with reporters following a rally against financial institutions’ support of private prisons and immigrant detention centers, as part of a May Day protest near Wall Street in Lower Manhattan, May 1, 2018 in New York City. Across the world, people are protesting and marching on the traditional day of workersÕ rights. (Photo by Drew Angerer/Getty Images)

New York gubernatorial candidate and former Sex in the City star Cynthia Nixon has upset some Black religious leaders with her recent comments about the war on drugs.

According to The Daily News, a group of African-American clergy wrote a displeased letter to the actress, demanding she make an apology for her comment that legalized marijuana licenses could serve as reparations for the Black community.

“Your comments make clear that you have no idea of the history and meaning behind the reparations debate in this country. It was a clueless, uninformed remark that did a disservice to black people who have fought for centuries for equal justice and basic human rights,” wrote the pastors.

READ MORE: This Is America: 5 powerful messages that will stay with you long after your Donald Glover hangover

Earlier this month, Nixon opined that communities of color that were disproportionately targeted by the war on drugs should benefit most from legalized marijuana as a “form of reparations.”

“Now that cannabis is exploding as an industry, we have to make sure that those communities that have been harmed and devastated by marijuana arrests get the first shot at this industry,” she told Forbes magazine.

“We (must) prioritize them in terms of licenses. It’s a form of reparations.”

While her intentions, and even some of her ideas have merit, the ministers say Nixon’s remark also does the community a disservice because it “feeds into harmful stereotypes about African-Americans.”

“Ms. Nixon, it’s time you made a formal apology for these damaging remarks. This type of unhelpful rhetoric clouds the important dialogue around this issue. We demand better,” they wrote.

I have to be clear here. @CynthiaNixon did not say that guaranteeing marijuana businesses in Black communities is reparations for slavery.

She said reparations need to be made for modern day mass incarceration to right the wrongs of it.

Nixon, who is also an activist, is challenging current New York State Gov. Andrew Cuomo in the Democratic primary for governor and has defenders who say we need to hear her out even if her word choice may feel sensational.

“She’s talking about specifically repairing the very recent harms of a racialized drug war in New York, where almost nine out of ten people arrested for marijuana use are Black and Latino,” said Heather McGhee, president of Demos Action.

“There is a gold rush happening in states where marijuana has been legalized, and that gold rush is creating profits that Black and Latino people are generally excluded from.”

Dear @CynthiaNixon, When African Americans are finally granted reperations, it won’t be something that has the win-win of being super cool for white people. That’s not how it’s going to work.