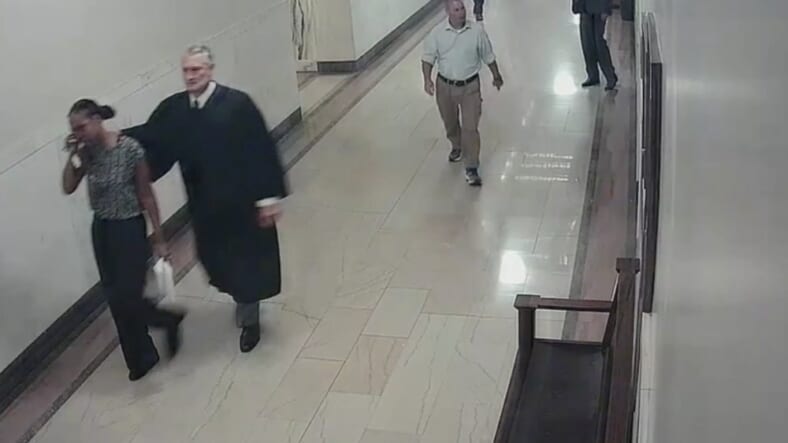 A magistrate judge in Ohio has resigned after video of him chasing down and grabbing a Black woman by her neck went public.

Michael Bachman, the now-former Hamilton County Common Pleas Court Magistrate, said he was forced to resign after the bizarre courtroom incident. He told Cincinnati ABC affiliate WCPO that he was to either “resign or be terminated.”

“I think the video speaks for itself,” Bachman told the station in his defense. “I didn’t choke her or manhandle her. I merely put my hand up to guide her to the courtroom.”

Whatever the case, Bachman put his hands on 28-year-old Kassandra Jackson.

“I resigned in order to save the court further consternation,” Bachman said. “But had I known it was going to become public, I would’ve defended myself in the investigation.”

The incident occurred on Sept. 4 when Jackson was trying to file for a protection order but, according to the Cincinnati Enquirer, staffers told her that she’d missed the 8 a.m. deadline. Jackson became visibly angry and began arguing with them before storming out of the courtroom.

In the video, Bachman rushes from the bench to go after her and eventually catches up with her near the elevators. As the two are walking back to the courtroom together, Jackson tries running down a side hall.

That’s when Bachman grabs her neck and then her shoulder, leading her back to the courtroom before sitting her down in the jury box. Bachman insists that he was simply trying to calm the woman down.

“I wish there was sound with the video so you can hear how she yelled at the top of her lungs,” he told WCPO. “I could not hear the defense attorney questioning a witness.”

Bachman found Jackson in contempt of court for her “disrespectful and disruptive behavior.” In the contempt citation, the judge wrote that Jackson was “witnessed becoming belligerent and screaming loudly in the hallways.”

Jackson was initially sentenced to three days in jail. The three-day sentence was extended to a week after Jackson resisted the two deputies Bachman had ordered to arrest her.

Video shows the young woman struggling as multiple officers drag her to an elevator leading to a holding area. Jackson was eventually strapped to a restraining chair.

Jackson was released after two days by Judge Kim Wilson Burke when she ordered the contempt charge tossed.