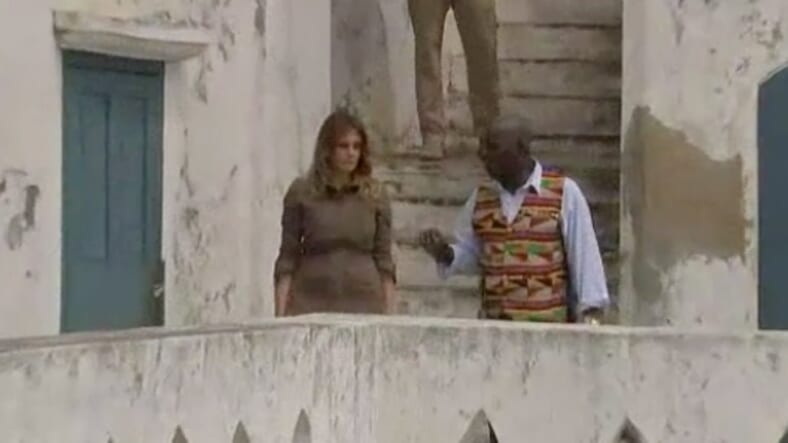 Melania Trump departed Monday for Africa for her first major solo international trip as first lady, but public health experts are concerned that her message is at odds with US policy enacted by her husband.

Her itinerary reportedly ties in some of the pillars of her “Be Best” initiative, which focuses on the opioid crisis in America as well as the overall well-being of children— including bullying and social media practices.

“There are many programs across the country that are doing great things for children, and I believe we can replicate many of these programs overseas. This is why I am pleased to be working closely with USAID as I prepare for my first major International trip to Africa,” Trump said about her upcoming trip at last week’s United Nations General Assembly in New York City.

During the weeklong trip, the first lady will visit Malawi, Kenya, and Egypt. Her first stop was Ghana, where she greeted babies at the Greater Accra Regional Hospital in Accra, ABC News reports.

On Wednesday, Melania Trump said that she “will never forget” her visit to a former slave holding facility on Ghana’s coast.

The solo trek to Africa has become something of a tradition for first ladies, including Hillary Clinton, Laura Bush and Michelle Obama, CNN.com noted. But what differs from her predecessors’ tours is the message that Trump is set to serve up, which many believe clashes with her husband’s policies.

“Because of President Trump’s policies, we are denying women and children critical health assistance,” said a director of a major family-planning and HIV charity in Malawi (who preferred to remain anonymous). The presidential decree signed by Trump just days into office is hurting the very people his wife is on a mission to help.

According to the CNN report, Trump reinstated what’s been dubbed the ‘Global Gag Rule’ earlier this year, which cuts U.S. funding for foreign charities that provide or promote abortion – even if it’s legal in that country. The policy was first adopted by Ronald Reagan and Trump expanded it to cover all health-related charities receiving US funding, and prohibiting them from advocating for changes in the law where abortion is illegal.

“That is why some advocates call it the global gag rule, because it is policing speech as well as access to healthcare,” said Jennifer Kates, vice president and director of global health and HIV policy at the Kaiser Family Foundation.

“We need to ensure funding for family planning; otherwise, we will continue to have problems with unsafe abortion,” said Chisale Mhango, an advocate of women’s reproductive rights, who noted that Malawi (where abortion is illegal) had made great progress in family-planning awareness, thanks to USAID funding.

Mark Green, the Trump-appointed administrator of USAID, told CNN that the agency has been clear about the impacts of the policy.

“Our commitment is to report straight up on the numbers for those who have received funding and those who chose not to take funding because of the policy guidelines. And we remain far and away the largest donor of maternal and child health in the world,” he said

The ultimate goal is to help countries transition away from dependence on foreign aid, the report states.

“What we are looking to do appeals to President Trump the businessman,” said Green.