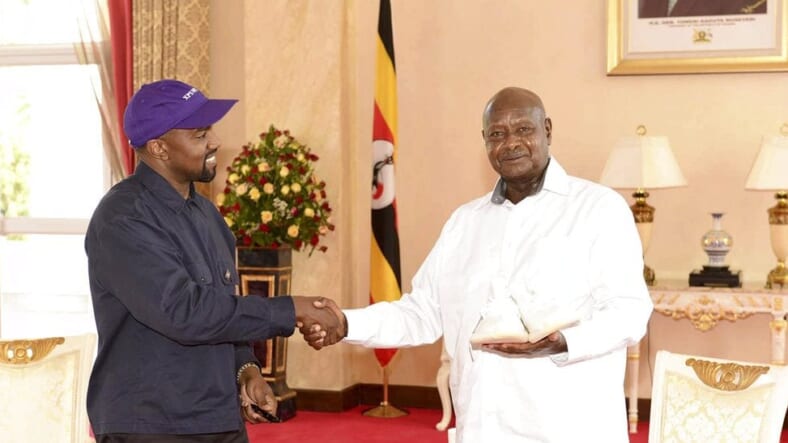 Associated Press
KAMPALA, Uganda (AP) — Kanye West handed Uganda’s president a pair of his autographed sneakers during a visit to the East African nation in which the rapper is said to be recording music in a tent.

The 74-year-old President Yoweri Museveni said he and West held “fruitful discussions” on Monday about promoting tourism and arts. He also gave West and his wife, reality TV star Kim Kardashian West, “Ugandan” names, the State House said in a Facebook post.
The couple has been vacationing in a national park while excited tourism officials see the visit as an endorsement of Uganda’s tourism potential.

While the presidency released photos of a hoodie-wearing West meeting Museveni at the State House, some Ugandans wryly pointed out that the president cracked down on hoodies earlier this year, saying motorcycle riders could no longer wear them in a bid to fight rising crime.

READ MORE: Dave Chappelle defends his friendship with Kanye West: ‘That’s my brother. I love him. I support him’

Museveni, one of Africa’s longest-serving leaders, has been at the center of unrest in recent weeks after a local pop star-turned-opposition lawmaker, Bobi Wine, alleged torture by security forces. The government denies it.

Uganda’s large youth population has increasingly expressed frustration over unemployment and accused the president of being out of touch. The government recently imposed a tax on social media and the constitution was changed to remove an age limit on the presidency, leading some to worry that Museveni plans to rule for life.
___
Follow Africa news at https://twitter.com/AP_Africa