Senior White House adviser Jared Kushner talked to Van Jones about foreign policy, the Kashoggi case prison reform, but people are talking more about why it wasn't a tougher interview 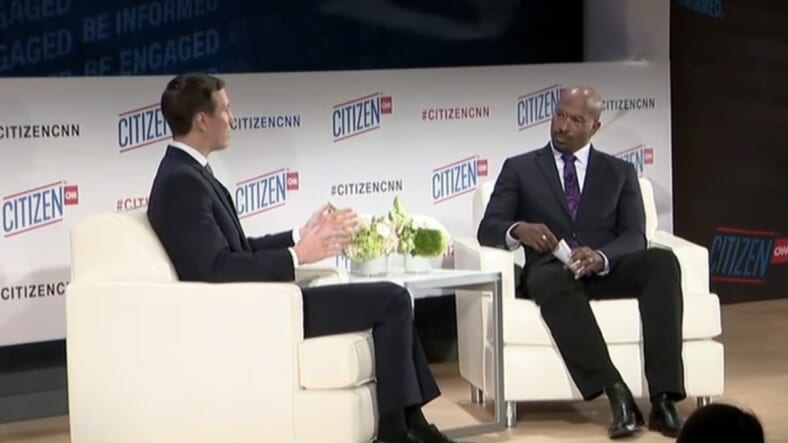 Van Jones wants Jared Kushner to explain to the American public what qualifies him to take on the tasks he’s been assigned as a senior adviser to President Trump.

But while Kushner routinely attracts political criticism, he wasn’t the only one that wound up taking jabs after the interview was over.

“Why should we have confidence in you to do all this stuff?” Jones asked the real estate scion who is best known for being the son-in-law of Donald Trump.

CNN's Van Jones: "Why should we have confidence in you to do all this stuff?"

During the sit down, revealed how he advised Saudi Crown Prince Mohammed Bin Salman to handle of the investigation into the murder of journalist Jamal Khashoggi.

“Do you trust the Saudis to investigate themselves?” Jones asked.

Jones: “What kind of advice have you given (Crown Prince Mohammed bin Salman) in this whole situation?”

But while the conversation was fairly civil, some on social media have criticized Jones for not being hard hitting during the interview. Many on social media laid into Jones, accusing him of throwing “softball” questions at Kushner like inquiries about his “power couple” relationship with wife Ivanka Trump and whether or not he’s “having fun” before he even got to any mention of Kashoggi.

Here are a few examples of the criticism:

Van Jones interviewing Jared Kushner right now: "How did you get this job? You have like the dopest job in the world, the secretary of everything…how did you wind up in this position?"

This why you shouldn't compare journalism to being a media personality reason #5091.

I don’t know what happened to @VanJones68. Frankly, I just hope that it isn’t contagious.

View the full interview below: