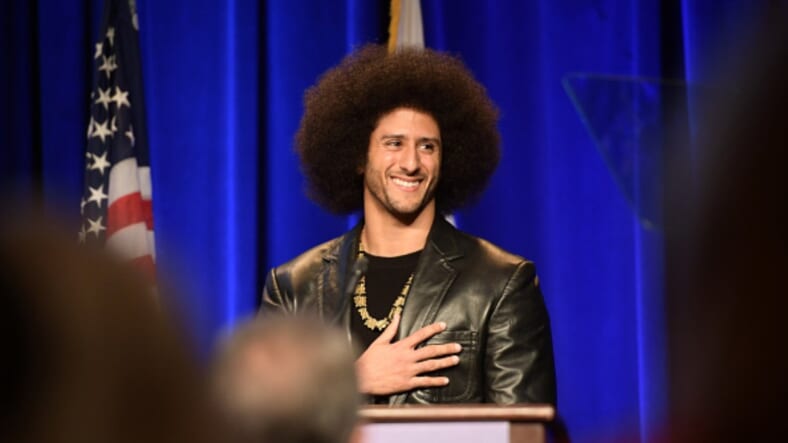 You snooze, you lose!

That should be the motto for the new Colin Kaepernick t-shirt that was released on Thursday and sold out within a few hours of debuting online, upsetting scores of fans who missed an opportunity to cop some Kaep wear—at least for now.

—NBA hands out suspensions after hardtop scuffle between Lakers, Rockets—

While the shirt doesn’t quite stand out with bold colors or anything, the black long sleeve shirt does bear the former quarterback’s name across the back with some metallic lettering that’s reflective for emphasis. Also, on the shirt is the infamous image of Kaepernick and his signature afro.

It seems Nike is capitalizing on their new brand ambassador after signing the athlete turned activist to their bold, new “Just Do It” campaign, with the slogan: “’Believe in something, even if it means sacrificing everything.”

According to the Nike website: “The Nike Sportswear T-Shirt displays several Colin Kaepernick logos on a blend of comfortable fabrics.”

“Reflective lettering spells out “Kaepernick” across the back to help you stand out.”

While the rest of us had to wait for the shirt to go on sale to grab one, insiders like Los Angeles Lakers’ LeBron James was already privy to the info and on Oct. 4 was spotted with the shirt on. Well, Bron is also a part of the Nike family so of course he’d get first dibs.

LeBron showed up to the Lakers’ preseason game in a Colin Kaepernick shirt. pic.twitter.com/K42uReODiP

For the rest of us, the shirt is celebrated because Kaepernick has used his platform to affect change and fight against racism and racial injustice and police brutality.

Still there are haters trying to mock the athlete and the apparel giant for teaming up.

A sheriff in Union County, Arkansas is making suspects put on Nike shirts during their mugshots in an attempt to protest Nike for collaborating with Kaepernick, the Daily Mail reports.

Sheriff Ricky Roberts in Union County, Arkansas makes people his department arrests put on Nike shirts during their mugshots in a pathetic attempt to mock the brand for its support of Colin Kaepernick. Call the Sheriffs office at (870)-864-1970 & demand this practice is stopped. pic.twitter.com/ydK9WAQZoH