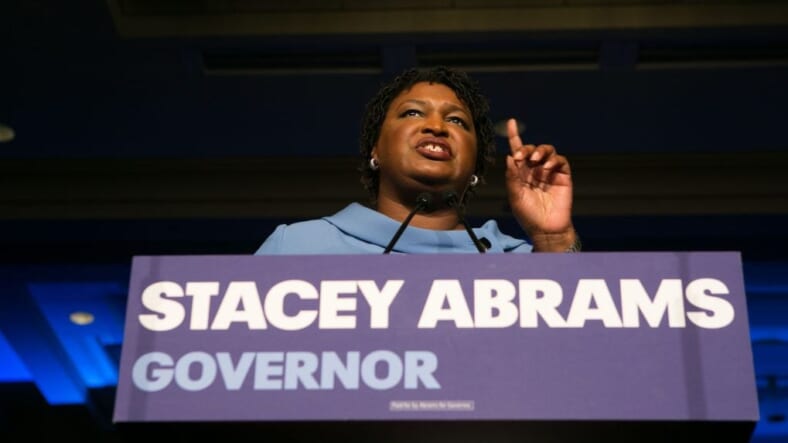 In the hotly contested governor’s race in Georgia, Stacey Abrams is doubling down on her plan to contest the current results, claiming there are still outstanding votes that need to be counted.

Her Republican challenger, Brian Kemp, who refused to step down as secretary of state with oversight of the election and has been called out by the Abram’s campaign and voters’ rights groups for voter suppression, has claimed victory and reportedly plans to begin his transition today.

But Abrams says, not so fast.

According to reporting from the Atlanta Journal-Constitution, hundreds of voting machines were locked up in government warehouses.

The machines were sequestered by local officials because of an ongoing federal lawsuit that argues Georgia’s electronic voting machines could be hacked or tampered with.

With fewer machines in precincts, Georgia voters faced long lines, some waiting up to four hours to cast their votes. The issues reportedly affected voters in Cobb, DeKalb and Fulton counties, the three jurisdictions covered by the federal lawsuit.

This is particularly disturbing given there is currently a very small margin between Abrams and Kemp—less than 63,000 votes. Kemp has 50.4% and Stacey Abrams has 48.66%. In Georgia you need 50% plus 1 to win and avoid a runoff.

The Abrams campaign told reporters that it is determined to make sure all votes are counted and is looking at its legal team for other actions they could pursue.

“Our opponent has had his office declare himself the victor and we do not accept that,” the Abrams campaign said in a phone call with reporters Wednesday evening.

Kemp’s team announced plans that his team would start the transition today to become governor. They released this statement:

“Brian Kemp earned nearly two million votes on Tuesday – by far the most of any gubernatorial candidate in our state’s history.

“Absentee ballots are counted and Kemp leads his opponent by 64,000 votes. Based on counts released by the Secretary of State’s office, Brian Kemp’s margin is so large that the number of provisional ballots and overseas ballots will not change his Election Day victory. Simply put, it is mathematically impossible for Stacey Abrams to win or force a run-off election.

“Peach State voters made a clear decision at the ballot box. Brian Kemp will now begin his transition as governor-elect of Georgia. He will work every day to keep our state moving in the right direction.”

—OP-ED: After the Midterms: The fight has just begun—

“We remain committed to ensuring that every single vote is counted, particularly given the significant irregularities in various areas of the state. In Fulton County alone, lines stretched for hours despite a warehouse with 700 voting machines that stood ready to be deployed but never were. Given the effort that Georgia voters made to make sure their voices could be heard, we owe it to them to fight on to make sure that every vote is counted. (As a reminder, the election results won’t be certified by counties until Monday or Tuesday of next week.)”