Viola Davis on ‘Widows,’ MeToo and expressing her femininity 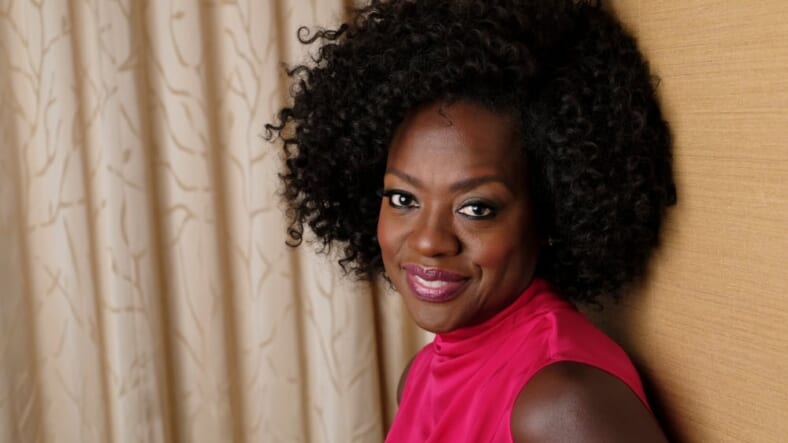 To Viola Davis, being naked on screen or onstage means more than having your clothes off. It means ridding yourself of self-consciousness and ego. It means exposing yourself.

“Oftentimes you do see dynamic acting — there are a lot of really dynamic actors — but there is a sense of vanity,” says Davis. “I always say that when people get naked on stage it always looks like they’ve been to the gym for about five years. And we all know that’s not the case. When we get naked in life, we may have some rolls of flesh around our stomach. You may have some stretch marks. Now that’s intimate.”

There was, memorably, no vanity in Davis’ Rose in “Fences,” a performance that reached its aching crescendo in her shattering, snot-dripping “18 years of my life” monologue. But in Steve McQueen‘s electric Chicago underworld thriller “Widows,” Davis’ raw intimacy includes a dimension she has rarely, if ever, gotten to express in film — her sexuality.

In “Widows,” McQueen’s follow-up to the Oscar-winning “12 Years a Slave,” Davis stars as the wife of a veteran thief (Neeson) who dies, along with his crew, in a heist gone wrong.

For their spouses, it’s almost as if their lives have also been extinguished. But with Veronica Rawlins’ leadership, they (the other women are played by Michelle Rodriguez, Elizabeth Debicki and Carrie Coon) resolve to take over their late husbands’ criminal plans and pull off what none expect them capable of.

“This was a great experiment in exploring how to work out getting back your power,” says Davis. “In my life I’m still learning that.”

When a reporter points out that she — one of the most movingly outspoken advocates for on-screen representation and inclusion — seems quite in control of her considerable power, Davis demurs. “Like everyone, I have my good moments and bad moments.”

Davis has won an Oscar (for “Fences”), an Emmy (for “How to Get Away With Murder”) and a Tony, twice (for “Fences” and “King Hedley II”) — a trifecta that no other black actor has accomplished, and few others, for that matter. Along the way, her impassioned acceptance speeches have been some of the most potent thunderbolts of inspiration in the wider fight for diversity, beamed out to the unrepresented and the overlooked everywhere.

But it’s been almost a decade since her “Doubt” co-star Meryl Streep pleaded “My God, somebody give her a movie!” at the Screen Actors Guild Awards (and later called her “possessed to the blazing, incandescent power”). Since then, Davis has been a mainstay on screens big and small, but she has seldom — except in the Shonda Rhimes ABC series and now “Widows” — been front and center. She has even expressed some regret over 2011’s “The Help,” noting “it wasn’t the voices of the maids that were heard.” The same year, Davis formed a production company with her husband, the actor Julius Tennon, with whom she has an eight-year-old daughter.

For McQueen, Davis’ lack of leading performances is one of the most glaring injustices in Hollywood.

“She can only be judged by the films she gets to do. Don’t forget: she could not really make a living in film because no one was giving her any roles,” McQueen said by phone. “She was not given an opportunity to fulfill her craft. So she had to go on television. Viola’s 53 years old. She should have a vast body of work by now.”
Does Davis feel the same way?

“I mean, yeah,” she sighs. “I sort of feel that sometimes. But I’m honored that I’ve gotten to this point. This is a very privileged life. I feel like if I sit here and I say, ‘I should have had more lead roles,’ some dissatisfaction with the moment — I can’t do that. I really can’t.”

Davis, the fifth of their six children, grew up impoverished, in dilapidated homes in Rhode Island, the daughter of an alcoholic father who was abusive to Davis’ mother.

“I became an actor because I was an observer. It’s said that actors are observers and they’re thieves. You observe life and then you steal from it,” says Davis. “The beauty of how I grew up is I saw so many horrific but glorious things happen in public. When you grow up poor, nothing is undercover. You hear everything played out because people are living in close proximity to each other. You know who the alcoholic is. You know who’s getting beaten by their husband.”

Davis has said before that she’s motivated to honor the dreams of her “eight-year-old self.” ”She’s always sitting there,” says Davis. “And, really, it’s easy to make her happy, whereas it’s sort of hard to make me happy now.” And she lets out a belly laugh.

That upbringing has informed how Davis has responded to the #MeToo movement: applauding it, encouraging it, but also fearing that its focus on Hollywood actresses and executives is limited. She cites her long-running involvement with Gail Abarbanel’s Rape Treatment Center at the Stuart House as the kind of place that needs support.
“It’s much bigger than a hashtag,” she says.

“Widows,” penned by McQueen and Gillian Flynn (“Gone Girl”) is based on Lynda La Plante’s 1980s British series, but its tale of female empowerment has obvious connections to today. In rehearsals, McQueen would sit with Davis and the other actresses and talk through their own experiences. “All the things in our lives that we felt people didn’t see,” says Davis. “Like my femininity.”

McQueen wanted to bring all of those stories to the table. Davis would have preferred to wear a wig but McQueen disagreed. He wanted Davis to look just how she is. “I know this woman,” McQueen told her. “She just hasn’t been in the American cinema. So it’s about time we introduced her.”

Davis has made such introductions a regularity, bringing one African-American woman after another to a screen where they didn’t before exist.

“My big thing — this is my ego — I always want people to look back at this time and I want my name to be in it. I always want to be in the conversation,” she says. “Not just in movies, just in terms of people seeing themselves differently.”