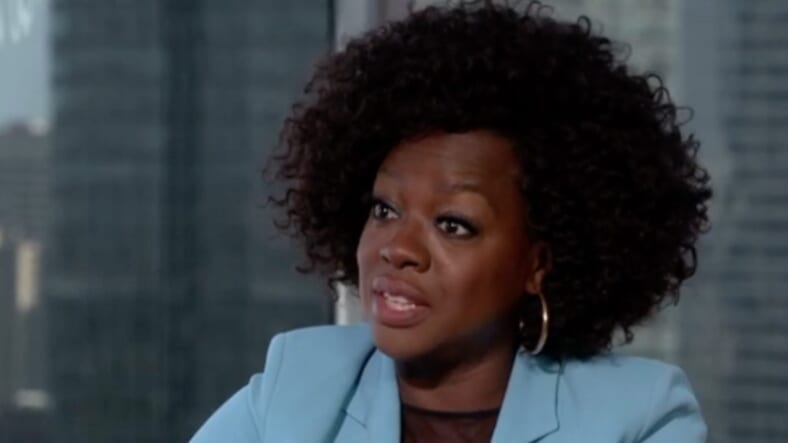 It’s almost time for Steve MCQueen’s highly-anticipated film, WIDOWS to hit theaters and we caught up with the film’s stars to find out why they were attracted to the project.  In it, Viola Davis stars  as Veronica, a woman who has to deal with the unexpected loss of her husband (Liam Neeson) and the mess he left behind.

She finds herself in a position where she and the other women (played by Michelle Rodriguez, Cynthia Erivo, and, Elizabeth Debicki) are forced to find strength they never knew was there. One of the most striking things about Davis’ powerful performance is the way she manages to portray a vulnerability we’re not used to seeing from her.

“It’s empowering for me. I personally think that’s the only way to live, is through vulnerability because how else can you love? How else can you connect if you’re not vulnerable? I’m a Black woman and a woman and I think the strong thing that we do is the lie. We have done that because we feel that we are hustling for our worth and we feel like there’s no one out there to save us,” she told TheGrio during an exclusive interview. “These women are trying to save themselves through this heist.”

While Liam Neeson admits he didn’t give the interracial marriage element much weight when taking on the role of Davis’ husband, it’s a dynamic we don’t often see portrayed in this way on the big screen.

“I must admit, i didn’t give it a huge amount of thought,” he said. “They’re just crazy about each other. I didn’t read into it.”

Viola Davis on the other hand, admits she was attracted to the unusual way the couple interacts and is well aware of the fact that a woman who looks like her isn’t always cast in this type of role. Still, she wishes people would pay attention to something other than her skin color when watching her work.

“I think that’s the most powerful statement is to not make a statement. It’s just like with this movie; because it’s Steve McQueen who is directing it and certainly because of some of the themes in the movie, he gets all the hard questions about race. ‘Do you think things are changing with women?’ A lot of those questions are not asked of his caucasian counterparts. It’s almost like as a Black director, you have got to be representative of a larger issue,” she says.

“I feel the same way as an actor. It’s like, ‘what do you represent? What idea do you represent in the movie? I always say, ‘Can you just sit with me? Can you just see me?’ All of the things I deal with in my life, I would say race plays a part in terms of how people see me but in terms of me recovering from the loss of my father, getting married, being a mom, finding some semblance of joy in my life, that’s a human journey. I would like people to see me.”