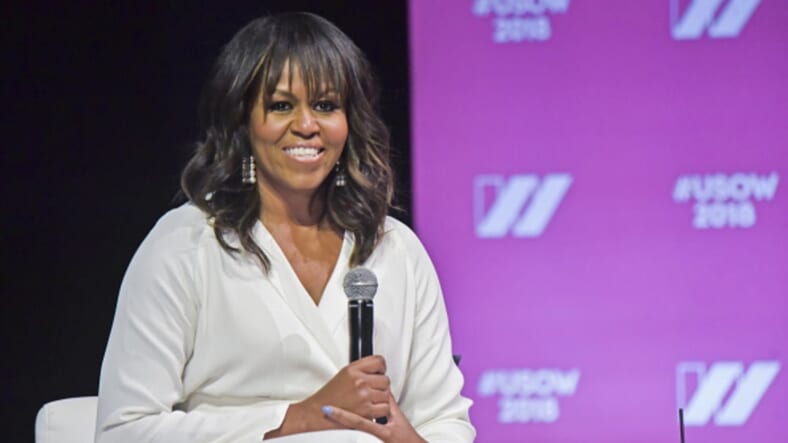 Former First Lady of The United States Michelle Obama speaks on stage at The United State of Women Summit 2018 - Day 1 on May 5, 2018 in Los Angeles, California. (Photo by Rodin Eckenroth/Getty Images

Ellen DeGeneres brought her hijinks to Costco along with the Former first lady Michelle Obama who played along as she surprised fans with her presence and signed copies of her New York Times bestselling memoir Becoming, PEOPLE reports.

“Oh look, it’s the first time I’ve seen my book in a store!” Obama excitedly said as the two made their way crisscrossing through the aisles of the retail store. Obama will appear in an upcoming Ellen Show segment as she promotes the book amid her sell-out tour stops.

DeGeneres gets the crowd worked up too as they applaud the former first lady. She then belts out an impromptu tune for Obama.

“Michelle Obama, Michelle Obama wrote a book,” she sings. “She mentions Oprah [Winfrey] several times and me only once!”

DeGeneres adds, “Michelle wrote a book mentioning Oprah too many times, but me only once. One time she mentions me but only once!”

DeGeneres is all about fun and Obama such a good sport for going along with the talk show host’s crazy antics.

Obama’s been busy on tour and sat down with Winfrey in Chicago Tuesday night to discuss her juicy memoir. She opened up and even revealed for the first time her reaction after she left the White House after Donald Trump’s inauguration.

“When I got on the plane I think I sobbed for 30 minutes,” she said, according to USA Today. “And I think it was just the release of eight years of trying to do everything perfectly. I said to Barack, ‘That was so hard. What we just did that was so hard and I’ve wanted to say that for eight years.’”

Obama also announced a new online shop at becomingmichelleobamashop.com that she launched containing merchandise that she hopes will inspire her base

The site features clothes, mugs, pins, notebooks, candles and tote bags all covered in Mrs. Obama’s own motivational messages and will be sold online and tour stops, according to reports.

The proceeds will support the Global Girls Alliance initiative.

@MichelleObama is here for the whole hour tomorrow. I’m so happy, I could sing. #IAmBecoming