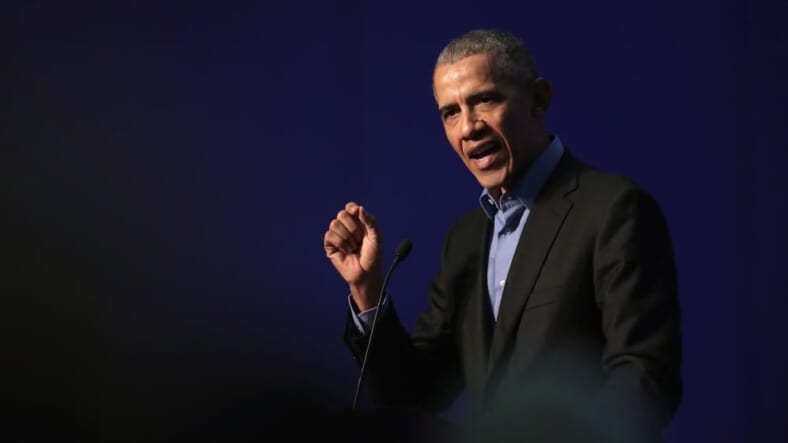 Not of his historic presidency, but he told a rapt audience at the second annual Obama Foundation Summit at Chicago’s Marriott Marquis hotel that the world needs a remake because of the current state of affairs.

—VIDEO: Barack Obama surprising his wife Michelle at her book signing is the ultimate in #BlackLove—

“I was having a conversation with a friend, who was depressed about the current course of our country — it’s a conversation that happens a lot,” Obama said, according to the Chicago Sun-Times.

“I had to remind him that this is what happens. Societies are these incredibly complex, organic things that sometimes moves forward and sometimes takes a step back.”

“This is a heavy burden,” he told the captive audience. “But what a joyous burden to have this grand adventure where you can literally remake the world right now because it badly needs remaking. If you could blindly choose when you wanted to be born, you’d choose now … Or,” he quipped, “maybe two years ago.”

While Obama didn’t mention President Donald Trump, it was the obvious elephant in the crowded room of millennials, some who hailed from Chicago and others as far away as Africa. They clearly understood the undertones of the messaging.

Obama took the stage after being introduced by teen author Esperanza Rivera.  He talked to the up and coming leaders about lessons learned from his stint at the White House, and how the youth can use their voices to become changemakers.

“As a community organizer, what I learned over time was that everybody had a story, and everybody’s story was sacred, that if we bother listening to each other, those stories merge and blend. We don’t feel like that now because we don’t listen to each other,” Obama said.

“It’s very hard when you have entire industries built and designed to make people think they’re different, to set them against each other. My job now, as well as your job, is to wipe the windshield so people can see clearly.”

Obama shared the troubles he encountered on his journey to become an effective politician.

“Our central experiment is based on the idea that each of us has power, and we win that power through consent. The question is how do we exercise that power? We are so confused right now, blinded with racism, hate and anger,” he said. “The single most important thing we can invest in right now is people. We gotta get people to figure out how to work together. That’s where you all come in.”

“Chicago is not just where I grew up but where I discovered who I was. I came here as a boy. I left here as a man,” he continued. “Chicago is this extraordinary laboratory. The world converges here in a powerful way. You have extraordinary wealth smack dab next to extraordinary poverty, extraordinary violence. You see all of our glory and all of our warts, and it speaks to the larger story and contest of ideas that exists around the world.”

Since Obama’s wife, Michelle Obama is on her Becoming book tour that has become a huge success, 826Chi non-profit founder Dave Eggers asked him when his White House memoir would be hitting the shelves.

“It’s just brutal. I just sit there, type two words and delete,” Obama said. “This is causing some strain in our marriage, the fact that Michelle’s finished [with her book] and I’m not. She’s got her feet up, saying, ‘So,  how’s it going?’ ” he said jokingly.

The crowd recently went crazy too when the our forever President popped on stage at Michelle Obama’s Washington, DC event like the rockstar he is to celebrate our forever First Lady.

“This is like — you know when Jay-Z comes out during the Beyoncé concert?” the former president said, according to CNN. “Like, ‘Crazy in Love’?”

Obama’s still got it!

The conversation with Michelle was hosted by former top Obama adviser Valerie Jarrett.

Jarrett asked Obama about the first time he met Michelle: “First of all, she’s really tall, and most of it was legs.”

“There are children here,” the former first lady said joking.

Becoming is on pace to become an international hit. First day sales topped 725,000 copies, making it one of the year’s biggest debuts.

Crown Publishing told The Associated Press on Friday that the figures include sales and pre-orders for the former first lady’s memoir include hardcover, audio and e-books editions for the United States and Canada. “Becoming” was released on Tuesday, the same day Mrs. Obama launched a national book tour . Crown also announced that it had raised the book’s print run from 1.8 million copies to 2.6 million.