These black women in media know how to show up and support each other. 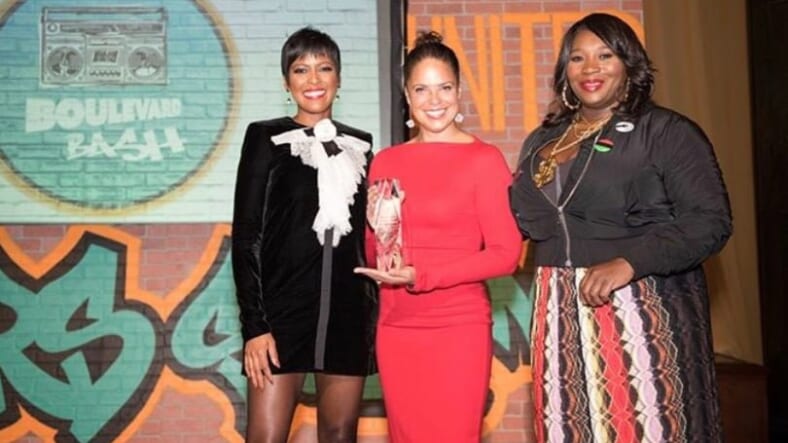 Black women in media don’t have it easy.

They’re often the only ones that look like them in a room.  And they even can face backlash in the day-to-day of doing their jobs (just ask April Ryan, Yamiche Alcindor or Abby Phillip).

But there was no shortage of love and respect between black women media stars at this year’s Harlem United 30th anniversary bash, which honored award-winning journalist and founder of Starfish Media Group, Soledad O’ Brien and Former Director of the White House Office of National AIDS Policy Douglas M. Brooks.

“For three decades, Harlem United has been there serving people that society often forgets about or sometimes doesn’t even want to know about,” said O’Brien upon receiving the “Community Champion Award.” “[The] media often forget [these issues] exist and [Harlem United] [services] people who need it and people who deserve it. [They] focus on their health and their well-being.”

“As a storyteller, I’ve tried to look at social justice in a similar way. Fran Tarkenton once said “If you have three quarterbacks, you have no quarterbacks,” she continued. “I think what he was trying to say was that when you’re trying to tell a story of everything, you often fail to tell the story of anything. Actually doing the job well is to focus on the individual and one person at a time to move the needle. It’s what makes magic ultimately in storytelling and it also is what makes Harlem United so special.”

“Soledad is Black girl magic,” says Hall. “And she’s the clap back queen on Twitter. Don’t get into it with Soledad on Twitter. I think being here for Soledad, being here to watch Bevy host this event and being here for Harlem…those are the three things that are very important to me. A good sisterhood, a good community, and Harlem so I wouldn’t miss it for the world. I want to…honor Soledad, someone that I admire both as a mother and a journalist, as a strong woman of color.”

The host of the night, and media maven, Bevy Smith, also shared her thoughts on Soledad being honored:

“My girl Soledad O’ Brien does so much work, not just in the Black community but communities overall. Especially when she sees anyone going through a struggle. She was on the ground for Katrina, she’s been there for Haiti, she’s been there for so many world disasters. HIV/ AIDS is something that definitely plagues the Black and Latino community, as an Afro-Cuban, this is something that is really close to her so I’m glad that she’s being honored. She’s definitely done the work.”

“Harlem United is such a great organization. It’s a charity that is near and dear to my heart; the services that they provide to Harlem are so greatly needed. I don’t know if you know this but Black women are the second highest number of new HIV infection rates in the county. So for a woman like myself — because I  have nieces, I have friends– this organization is on the ground floor doing the real work. That is why it’s so important for me to be here.”

For more information on Harlem United and health resources, check out https://www.harlemunited.org

Check out some highlights from the red carpet.