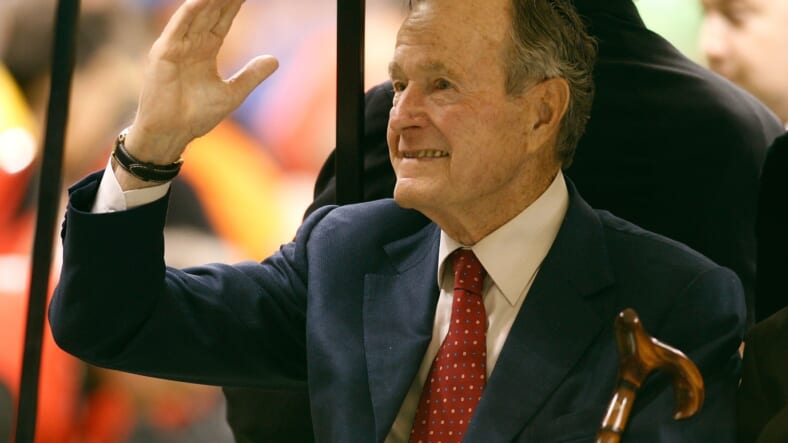 Former US President George H. W. Bush waves to the fans from the field prior to the New Orleans Saints playing against the Minnesota Vikings during the NFC Championship Game at the Louisiana Superdome on January 24, 2010 in New Orleans, Louisiana. (Photo by Chris Graythen/Getty Images)

George Herbert Walker Bush, who served as the 41st president of the United States, has died at age 94.

Spokesman Jim McGrath announced the former president’s death Friday night in a tweet. The Yale University graduate passed away at his home in Houston, Texas, according to CNN.

Despite battling multiple illnesses, including a mild case of pneumonia and vascular parkinsonism, a rare form of Parkinson’s disease, Bush always seemed to look on the bright side.

“It just affects the legs,” Bush, who was wheelchair-bound, told Parade magazine of vascular parkinsonism in 2012. “It’s not painful. You tell your legs to move, and they don’t move. It’s strange, but if you have to have some bad-sounding disease, this is a good one to get.”

“George Herbert Walker Bush, World War II naval aviator, Texas oil pioneer, and 41st President of the United States of America, died on November 30, 2018. He was 94 and is survived by his five children and their spouses, 17 grandchildren, eight great-grandchildren, and two siblings,” the former president’s office said in a statement. “He was preceded in death by his wife of 73 years, Barbara; his second child Pauline ‘Robin’ Bush; and his brothers Prescott and William or ‘Bucky’ Bush.”

His eldest son, former President George W. Bush, put out a separate statement of his own Friday night.

“Jeb, Neil, Marvin, Doro, and I are saddened to announce that after 94 remarkable years, our dear Dad has died,” he said in the statement. “George H. W. Bush was a man of the highest character and the best dad a son or daughter could ask for. The entire Bush family is deeply grateful for 41’s life and love, for the compassion of those who have cared and prayed for Dad, and for the condolences of our friends and fellow citizens.”

Funeral arrangements are expected to be announced at a later time but the service will take place the National Cathedral in Washington D.C. His burial will be at the George H.W. Bush Presidential Library, which is located on the campus of Texas A&M University.