The news came just a day after she surprised screaming and cheering happy teens in a visit to a New York City girls club as part of her book tour. 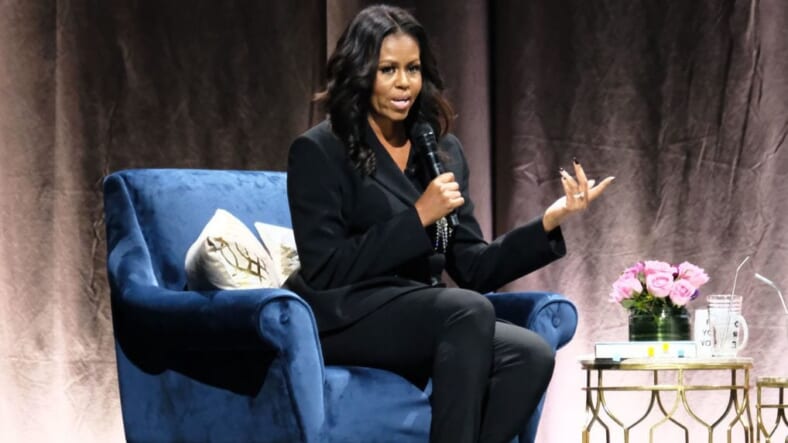 Forever first lady Michelle Obama on Saturday posted a moving Instagram tribute to George H.W. Bush, showing a picture of the late 41st president giving her a kiss on the cheek in the Oval Office.

On Sunday, the Becoming author announced the cancellation of her book tour appearances in Paris and Berlin to attend Bush’s funeral after his death on Friday, according to PEOPLE magazine.

The decision highlights one of the reasons Michelle Obama remains one of the most popular first ladies in the nation’s history.

The news came just a day after 30 teens at a New York City girls club got the thrill of their lives when she surprised them early Saturday afternoon with a visit prior to her speech in Brooklyn on her Becoming book tour.

Inside a Lower Eastside Girls Club, former White House chef Sam Kass posed a question to the girls, aged 13 to 18: “If the First Lady was coming over for dinner, what would you cook her?” Kass asked, according to Vanity Fair, before someone clarified that by first lady, Kass meant Michelle Obama. “Baked zita,” one girl responded, adding that she would also include garlic bread and water to drink.

To the girls’ surprise, Obama then made an appearance, leaving them screaming, cheering and wiping happy tears from their face. The first lady then served the girls prepared grain bowls with kale and the option of green beans, sweet potatoes, beets, eggs, and more and opened up a conversation with them.

The group sat around tables and Obama started by introducing herself, as if the stunned girls didn’t already know they were seated before greatness. “I’m Michelle, and I’m 54,” our forever FLOTUS said. Then, Obama listened as the girls shared with her stories about their struggles to eat healthy, make a difference in their communities, and their disappointment that the Lower Eastside Girls Club is the only girls club in New York; meanwhile there’s three similar clubs for boys. “Mhmmm,” Obama responded, according to Vanity Fair.

Then the questions came.

“Why don’t you want to run for president?”

Obama gave three reasons why: Sasha and Malia “are getting their lives back,” she said. Secondly, “it’s important for leaders to do their thing and then move aside and make space for the next generation.” Her last point was direct and to the point: “I don’t wanna be president!”

The experience is sure to be one that the girls won’t soon forget.