While some took issue with the difference between what both stars were wearing, others felt it was a non-issue 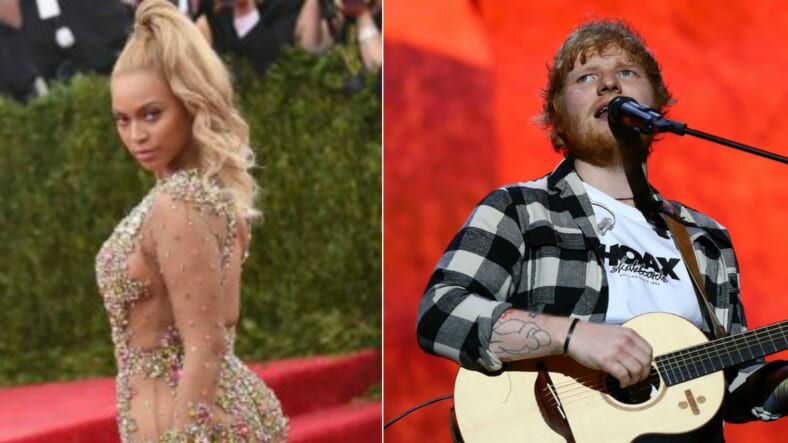 Beyoncé Knowles and Ed Sheeran are two of the biggest artists in the music industry, but when they joined forces to performed at the Global Citizen Festival last weekend – a photo of them standing next to each other sparked a heated debate.

According to Yahoo, the pair performed their ‘Perfect’ duet from Ed’s Divide album to pay homage to Nelson Mandela but instead of focusing on their music, several fans were taken aback by their drastically different choice of attire.

“Ed Sheeran is a 27-year-old man the fact we’ve enabled him to feel it’s ok to dress like this at all, let alone next to Beyoncé really boils my piss,” tweeted a fan who goes by the handle @Shonfaye.

While Beyoncé is known for sporting flamboyant and over the top high fashion looks regardless of who is on stage, many agreed with the tweet’s overall message that the visual disparity between the two of them highlights what’s expected of women versus men in the industry.

“I get this,” posted one follower. “Even tho I appreciate good musicians in normal clothes the double standard is ridiculous… what is expected of female vs male artists.”

Others argued that the two stars simply chose attire representative of the their vastly different brands and that it was a reach to insinuate commentary on gender into something so innocent.

“Beyoncé chose to wear that, don’t blame Ed Sheeran,” another fan wrote in opposition. “If Michael Jackson was still alive and performed he would have definitely wore something just as flashy because that fits his persona, but Ed Sheeran is known for dressing like a regular guy. Not everything is an issue.”

“People who are saying Bey’s style is her style and Ed’s is his r naive to think industry expectations didn’t have any bearing in their deliberate early image formation,” someone pointed out as the debate raged on. “Bottom line- men can stand more on their hard work and talent alone while women often have to 10/10 everything.”