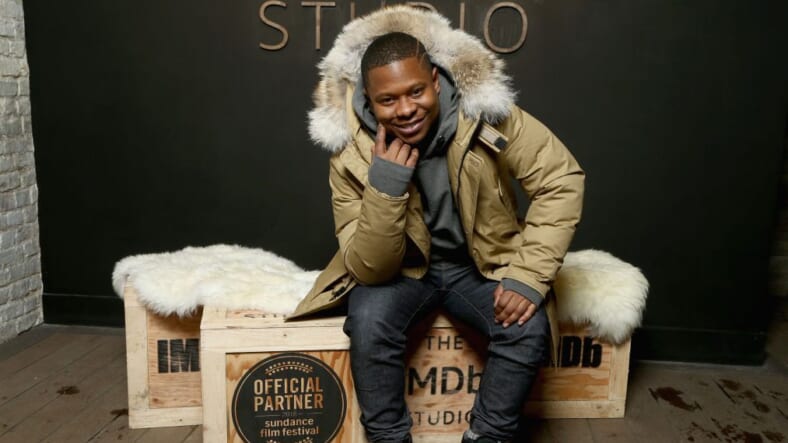 If you’re looking for something to watch this weekend, Tyrel is great choice. The flick that stars Jason Mitchell (The Chi, Straight Outta Compton) is a little hard to pin down to one genre. Billed as a drama, it feels like more of a dark comedy while at times it comes off like a suspense film.

Directed by Sebastian Silva, Tyrel is an anti-climactic journey into what happens when a Black man is left alone with a group of unfamiliar white folks who seem to be well-meaning enough, despite their occasional cultural slip-ups.

It’s a piece of art that highlights the subtleties of racism, the ambiguities of people’s intentions, and the unsettling feelings of anxiety and confusion that are all too familiar to Black folks today. Micro-aggressions from white men who pride themselves on being “woke” just as much as they fall back on ignorance to excuse their tone-deaf behaviors.

“Tyrel really doesn’t give you a way out,” Silva told Entertainment Weekly. “It’s a movie that’s designed to awaken prejudices and conditioning and social stereotypes within the audience.”

Mitchell’s performance is the real gem of the film that is hard not to compare to Jordan Peele‘s award-winning movie, Get Out. Don’t let that description fool you into expecting a crazy plot twist that never comes, but instead, allow it to frame the thought-provoking appeal of the project.

We caught up with Jason Mitchell to find out how he tackled the starring role in this interesting film.

“I have come to this point where artistically I have to take chances. I liked the fact that felt like a dark comedy. It felt like a horror film at the same time,” he told TheGrio during an exclusive interview. “The whole time you feel like you’re waiting for somebody to jump out but at the end of the day it shows every day life for a Black person in a situation like this.”

The film’s title is anode to one of the film’s first foreboding moments that there may be trouble ahead when one of the white boys in the group calls Mitchell’s character “Tyrel” instead of “Tyler.”

“That’s how it goes,” explains Mitchell. “First they get your name wrong and then it goes from there. It’s already weird from the beginning and then it gets weirder. That’s just how it is.”

Mitchell has made a habit of portraying Black men in an extremely authentic way and this project was no different.

“I sort of felt like it was a duty. I put a lot of myself into this movie and it really worked out,” he says. “Every scene I am in and every emotion I convey, I never hold back on how a Black man really feels or how a Black man would act. I’m bringing that to every character because we deserve to have that on TV. I don’t want to give a white person’s version of a Black dude.”

According to Mitchell, who called the film a form of “silent protest, ” helping the well-meaning white folks of the world understand where their blindspots are is a responsibility worth taking on.

“Let’s put it in a fishbowl and look at what it is. Let’s just talk about this. I think there’s a beautiful dialogue that’s going to get started,” he says. “Everybody wants to get on Instagram and quote Malcolm X but you have to remember that Malcolm X was killed by Black people. We don’t want to point the finger at each other sometimes but we will point the finger at white people. There are all sorts of things that we don’t want to talk about. That’s what is going to make or break this generation.”

“People don’t look at what they can actually do to make a difference. As a people and as young leaders, we have to start addressing these issues and these situations in a non-violent way,” he continues. “If we can show our genuine vibe to the rest of the world through what we are doing then I feel like we are accomplishing the mission, slowly but surely.”

Tyrel is available On Demand now.