Hero eyewitness, who took viral video of McDonald’s worker attacked by angry customer, says she did it to make sure he would be caught by police

Brenda Biandudi saw the whole thing go down right in front of her eyes.

McDonald’s worker Yasmine James, was attacked by customer Daniel Taylor for not giving him a second straw. The video of their fight has now gone viral. (Facebook)

The woman behind the first major viral video of 2019, where a McDonald’s employee in St. Petersburg, Fla. delivered a flurry of punches to a violent customer, says that she simply wanted to make sure that the customer was caught by police.

“I didn’t want (the video) to be out there, but when I was asking the police if he had been caught, they said that they couldn’t find him,” Brenda Biandudi, the woman who shot the Dec. 31 video, told theGrio.

The video was subsequently posted on social media first by her son, T.J. Biandudi, and later by her daughter, Kinie Biandudi – who was in the drive thru at the time of the fight.

Brenda happened to be in the McDonald’s at the very moment when 41-year-old Daniel Taylor reached across the counter and grabbed employee Yasmine James by the shirt during a dispute, which she says was over a straw.

A new Florida law had gone into effect where restaurants are no longer allowed to put plastic straws out in their lobbies. Customers must now ask for them, which didn’t sit well with Taylor.

After insisting the law wasn’t real, he demanded a straw from James, who then gave him one as requested. He then angrily demanded a second straw, escalating the incident, which is when Brenda Biandudi reached for her phone.

“When they started getting loud, I had my phone in my hand and I figured I would take a recording in case somebody needed something,” Biandudi said. “I didn’t know how much of an effort was being put into finding him [by police].”

The video clearly shows Taylor reaching across the counter and aggressively grabbing James. She responded with rapid fists of fire in self-defense. As James struggled with Taylor, the video catches a number of male employees lingering in the background and tepidly pulling Taylor back after he had eaten at least half a dozen punches from the much smaller James.

According to Biandudi, it wasn’t as egregious as it looked. She says that the incident happened so quickly that a number of the employees in the back did not know what was happening until the punches started to flow.

“It seemed like they weren’t that tuned in to what was going on because of the noise and everything,” she said. “I actually think they acted appropriately.”

Biandudi also says that Taylor, who also kicked another female employee named Tateona Bell in the stomach while she was standing near the exit door, returned to the McDonald’s minutes later to confront and intimidate the manager before being handled by the employees again.

“The customer had gone back in the restaurant and gone behind the counter and got in the manager’s face,” she said. “One of the other, bigger employees threw him outside and closed the door.”

Kinie Biandudi said that she and her mother actually trailed Taylor as far as they could up the street as they waited for police to arrive before finally heading back. She said that she believes that the location played a role in the slow response by law enforcement.

“This McDonald’s is in a predominantly Black neighborhood, so not to anyone’s surprise, the cops took a while to arrive,” Kinie Biandudi said. “My mother and I followed the guy down the street for a couple blocks then decided to go back to the McDonalds to let the workers know we had it on video.”

When the duo returned, Brenda Biandudi knocked on the door to let the manager know that she had caught the incident on video and corroborated James’ story that she was simply defending herself from the attacker. Once the police arrived, she shared the video of the incident with them. 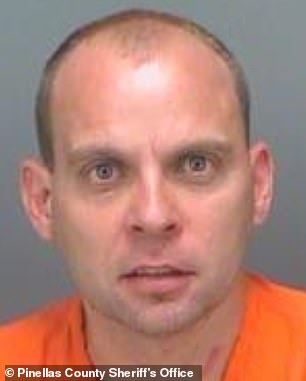 Daniel Taylor attacked a black woman at a St. Petersburg McDonald’s and now sits in the Pinellas County Jail for his actions. (Photo courtesy of Pinellas County Sheriff Office)

Taylor was eventually apprehended and charged with two counts of battery. He is currently being held in the Pinellas County Jail on $1,000 bond.

“Our highest priority is always the safety and well-being of our employees and customers at our restaurants,” McDonald’s spokeswoman Keisha Boyd said in a statement. “We have been in contact with the police department and are fully cooperating with their investigation.”

Brenda Biandudi simply wanted to do the right thing by shooting the video, but never imagined it would go viral. The video has in fact has received more than 1 million views after her son and daughter posted it on Facebook and Instagram.

“I held off as long as I could without saying anything, but I was the only witness in the lobby,” she said. “People were saying things that weren’t accurate, so I went ahead and gave some interviews.”

“The only reason I let them post the video is because (Taylor) had not been caught,” she added. “These last 24 hours have been very busy. I never thought I’d be in this position.”

When asked what she would expert her own daughter to do if found in a similar situation,Brenda Biandudi said that she believes that people need to simply be treated properly. While she understands that people who work in food service are often subjected to rude customers, no one should be physically attacked.

“People need to treat others the way they want to be treated,” Biandudi said. “If he put his hands on (my kids), then go ahead and defend yourself. You should try to avoid physical confrontation, but if someone put hands on you, you have to defend yourself,” she continued. “We need to just treat each other right.”

Biandudi also hopes that James is able to keep her job following this terrible moment.

“She told me that she has a 2-month-old baby and my heart just went out to her. She needs to keep her job and I seriously hope she will.”