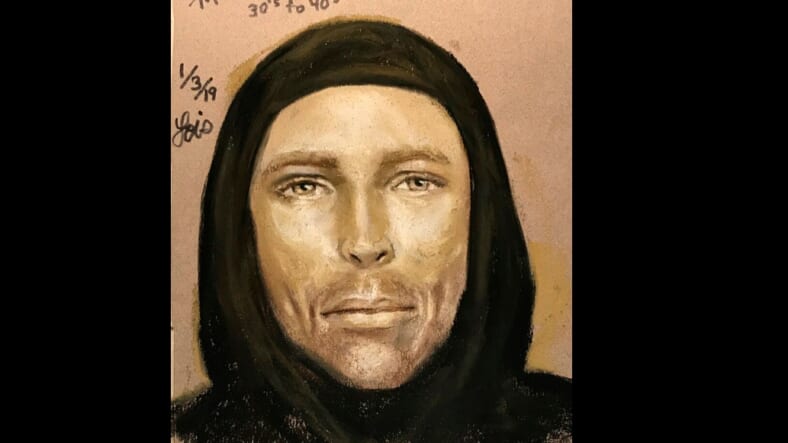 This Thursday, Jan. 3, 2019, sketch provided by the Harris County Sheriff's Office in Houston, Texas, shows an artist's rendition of the suspect in the fatal shooting of 7-year-old Jazmine Barnes on Sunday, Jan. 30, 2018, in Houston. Authorities say the girl was killed when the suspect fired into a vehicle she was riding in. Jazmine died at the scene and her mother, LaPorsha Washington, suffered a gunshot wound to the arm. (Harris County Sheriff's Office via AP)

HOUSTON (AP) — Authorities on Thursday released a composite sketch of a man accused in the death of a 7-year-old Black girl during a Houston-area shooting that her family believes might have been racially motivated.

The suspect is described as a white man in his 30s or 40s, wearing a black hoodie, with pale skin and blue eyes.

Investigators say he pulled up alongside the car Jazmine Barnes was riding in with her family Sunday and fired into the vehicle in the eastern outskirts of Houston. Jazmine died at the scene while her mother was shot in the arm.

The shooting occurred on a service road as the family was heading to a store.
The suspect had previously been described by authorities as having a beard.

But Harris County Sheriff Ed Gonzalez said at a news conference that additional information received by investigators made them realize the suspect had more of a “five o’clock shadow.”

Authorities on Thursday also released a short video of what they believe is the red truck the suspect drove.

“We’re not gonna rest until we find justice for Jazmine,” Gonzalez said.

At a separate news conference, Jazmine’s mother, LaPorsha Washington, said she believed the shooting could have been racially motivated. Some Houston activists believe race prompted the shooting and point to an unsolved incident in the area in 2017 in which a suspect described as white shot into a vehicle carrying at least two Black people.

Gonzalez said authorities have not yet determined a motive in Sunday’s shooting and have not found links between it and the 2017 cases.

Investigators remain focused on finding the suspect, Gonzalez said. Washington implored the shooter to turn himself in.

“His conscience is finally going to get to him after he sees my child’s face go across (television screens) so many times. He’s going to turn himself in,” Washington said. “Do the right thing.”

Lee Merritt, a national civil rights attorney with an office in Dallas and New-York-based activist and writer Shaun King, have offered a $100,000 reward for a tip that leads to an arrest.

Merritt, who had been working with Jazmine’s family, said while there is no confirmation the shooting was racially motivated, “we do believe it was racially motivated in part because our nation at this moment is a highly racially charged society.” Activists planned to hold a community rally on Saturday to knock on doors and pass out the sketch of the suspect in the area where the shooting took place.

Jazmine’s death has prompted an outpouring of support for her family from people, celebrities and sports stars across the country. On Thursday, Houston Texans wide receiver DeAndre Hopkins tweeted that he would donate his check from Saturday’s NFL Wild Card playoff game to help pay for Jazmine’s funeral costs.

Her funeral is on Tuesday.