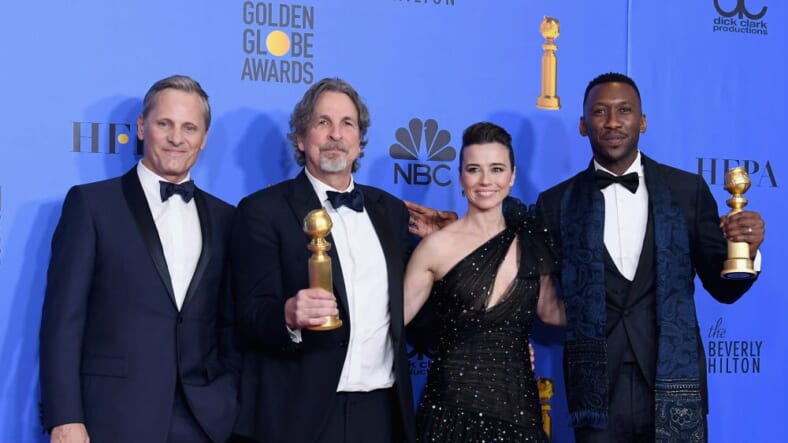 Green Book won big at the Golden Globes and Twitter is in its feelings about it.

But from the start the movie release has been bogged down by controversy.

Although the project was received well by critics, audiences blasted it for an approach that seemed to expect audiences to be touched by that tired old “white savior” cliche. Some even went as so far as to call it “a reverse “Driving Miss Daisy”

Then in November, while promoting the film, Mortensen shocked the audience present at the Arclight Cinemas Hollywood when he used the n-word during a Q&A panel that took place just before the screening.

Woman in audience: “Don’t say that!!”

Despite the actor’s apology, by then the damage had been done in the court of public opinion. So when the film was announced as Best Picture – while more celebrated films like Black Panther got completely snubbed – viewers took to social media to express their displeasure.

“Pretty bold for that Green Book speech to hinge on how INSPIRING Don Shirley’s story was when Don Shirley’s family keeps insisting that wasn’t his story at all” tweeted one viewer referencing allegations from Shirley’s family that the movie was based on false accounts that Tony Lip told his son about his time with the Black musician.

One member of the family even went so far as to call the project a “a symphony of lies,” which prompted Ali to personally apologize to Shirley’s loved ones for unknowingly taking part in that deception.

Your regular reminder that white creators of Green Book relied on a fraudulent white savior narrative that isn't even historically accurate https://t.co/IxhI86foIO

Despite the ongoing bad publicity surrounding his film, director Peter Farrelly attempted to make his acceptance speech inspirational, but even that didn’t exactly go off as planned.

Check out Green Book’s moment of victory and the less than excited reactions below.

great optics for Green Book, a film about race relations in America pic.twitter.com/pJT1um3gy2

And for real, Black Panther winning nothing and Green Book cleaning up at the #GoldenGIobes… pic.twitter.com/VcoBQiOAlm

"the winner is green book" pic.twitter.com/4IHmf2qpY7

adjusting to green book maybe winning all of these at the oscars too pic.twitter.com/tqCF1U7K6J