The antidote to Trump? 7 things you need to know about 2020 presidential hopeful, Julián Castro

Julian Castro, former HUD Secretary and former Mayor of San Antonio has told the world he is ready to run for president in 2020 . (Photo by Edward A. Ornelas/Getty Images) *** Local Caption *** Julian Castro

We’re barely a month into the new year and already several Democrats have raised their hand to contend Donald Trump during his likely reelection bid for the presidency in 2020. One name so far that most recently is getting a ton of attention is Julián Castro.

A native of San Antonio, Texas with Chicano roots, Castro had been considering a presidential run for almost two years and launched a presidential exploratory committee in December. Now, with the solidification of his campaign, Castro, 44, who is already a popular figure within the Democratic Party, could potentially make history as one of the youngest and the first Latino presidential nominee seeking a major-party ticket.

Those of us outside the Lone Star state may not be so familiar with Julián Castro or his background. Besides being a husband to his school teacher wife, Erica Lira and father to daughter, Carina and son, Cristian, here are seven facts about the man who wants to be the one to end Donald Trump’s reign as president.

On Monday, January 14, Castro spoke at the annual Latino Victory Fund (LVF) summit in Puerto Rico. According to The Hill, Castro said “I chose as my first visit after [my] announcement to come to Puerto Rico, because I want all the people of Puerto Rico to know that you count, that we respect you.” Moreover, he rebuked the Trump administration for their failure to aid Puerto Rico after Hurricane Maria.

Thank you to @CarmenYulinCruz and @latinovictoryus for hosting me in San Juan. I was inspired by the folks on the ground putting in hard work to rebuild every day. Please continue to send support; there is still so much to be done here. #RebuildPuertoRico pic.twitter.com/7KC20PJoWj

He was the youngest mayor of a Top 50 American city.

While Julián Castro has never been a governor, senator or vice president, he has boots on the ground experience as the former Mayor of San Antonio. He was first elected in 2009 and then re-elected for a third term in 2013. 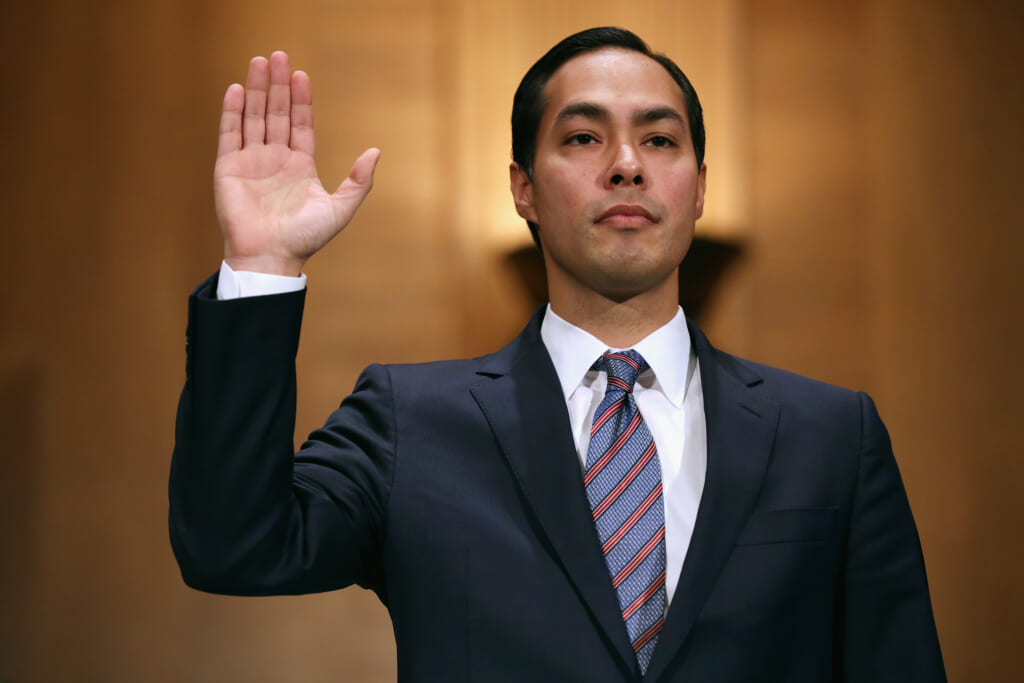 Some of his accomplishments as mayor include the creation of Café College, a one-stop shop for high quality guidance on college admissions, financial aid and standardized test preparation to any student living in the San Antonio area. Also, while he ran the city, San Antonio ranked No. 1 on the Milken Institute’s Best-Performing Cities list, graded A+ for doing business by Forbes and was ranked as the nation’s No. 3 new tech hotspot also by Forbes.

He has a twin brother who is also in public service.

His identical twin brother, Joaquin Castro, is also a rock star in the Democrat’s ranks, serving his third-term in the U.S. House of Representatives of Texas’ 20th Congressional District. Both Joaquin and Julian earned their undergraduate degrees at Stanford University, where they graduated with honors and distinction in 1996. They also both went to Harvard Law School and received their juris doctorate in 2000. Julian does however have a leg up on his brother having been born on September 16, 1974 at 2:40AM; one minute before Joaquin.

He is a proud grandson of Mexican immigrants.

In his 2018 memoir, “An Unlikely Journey: Waking Up from My American Dream,” Castro details the courageous life of his grandmother, Victoria Castro, (who he affectionately called “Mamo.”) She was a Mexican-born immigrant, who orphaned at age 7, crossed the U.S. border into Eagle Pass, Texas in 1922. Prohibited from having a formal education in the U.S., Castro’s grandmother was as a domestic who worked in San Antonio, where she cleaned houses and worked two and three jobs at a time to make a better life for her daughter, Rosie, Castro’s mother, and then for her grandchildren. 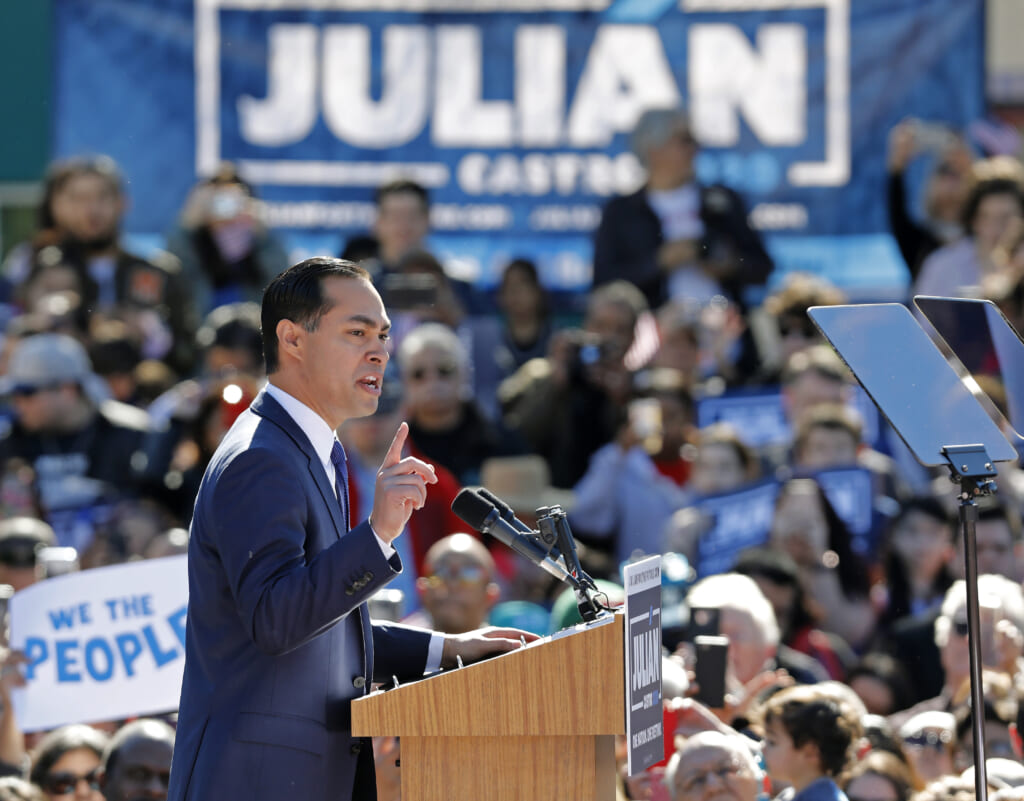 Julian Castro, former U.S. Department of Housing and Urban Development (HUD) Secretary and former San Antonio Mayor, announces his candidacy for president in 2020, at Plaza Guadalupe on January 12, 2019 in San Antonio, Texas. If successful, Castro would be the first Hispanic candidate to win the White House. (Photo by Edward A. Ornelas/Getty Images)

During his speech announcing his presidential run at the Plaza Guadalupe theater in his hometown of San Antonio, Castro had this to say about his Mamo:

“When my grandmother got here almost 100 years ago, I’m sure that she never could have imagined that just two generations later, one of her grandsons would be serving as a member of the United States Congress and the other would be standing with you here today to say these words: ‘I am a candidate for President of the United States of America.'”

His mother is a renown Texan activist.

Julian Castro hugs his mother Rosie Castro before announcing his candidacy for president in 2020. (Photo by Edward A. Ornelas/Getty Images)

According to a 2012 article in My San Antonio, as a child Rosie “picked ticks from white families’ cocker spaniels” to help her mother make a living. After experiencing first hand the stark racial and economic inequities that pervaded predominantly Chicano segregated communities in San Antonio, Rosie became a member of the El Partido Nacional de La Raza Unida (National United People’s Party), a formerly registered political party dedicated to changing the socio-economic and political status of Chicanos. In 1971, at just 23 years old, Rosie ran for San Antonio City Council with backings from the La Raza Unida and the Committee for Barrio Betterment.

Barack Obama is his former boss.

Julian Castro was also the 16th United States Secretary of Housing and Urban Development during President Barack Obama’s second term from 2014 to 2017. He was the youngest member of Obama’s Cabinet. 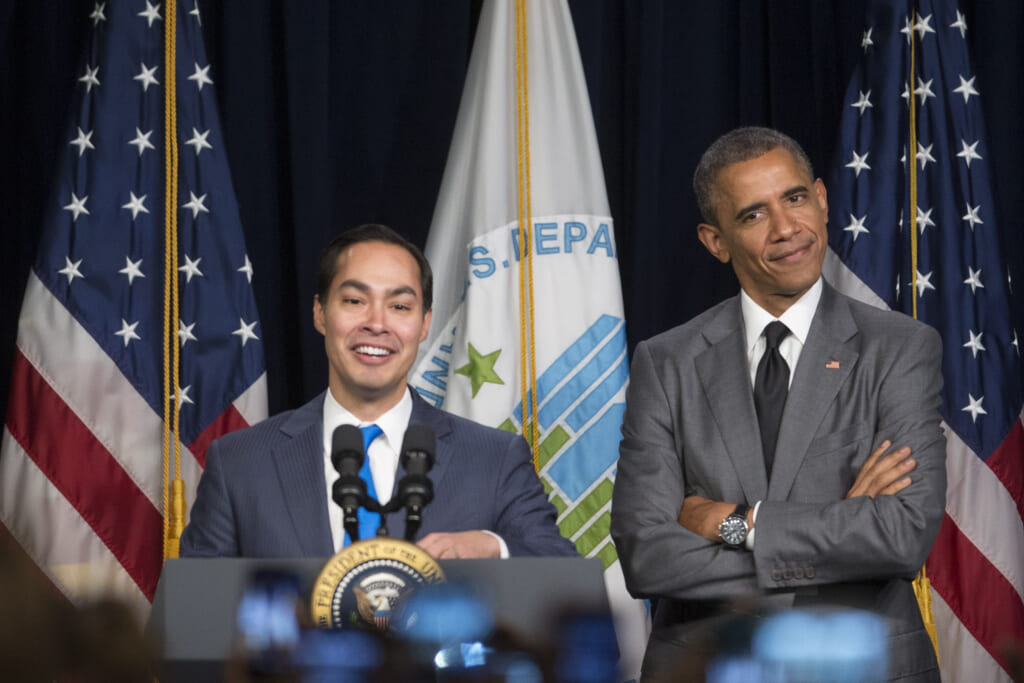 Many people may also remember that he was selected to deliver the keynote speech for President Obama at the Democratic National Convention in 2012.

He is being called the “antidote to Trump.”

In today’s political climate, where Trump’s xenophobia, birtherism and anti-immigrant fervor is commonplace, Castro stands firm in and is proud his Chicano roots. Castro told CNN that he represents “the antidote to Trump because “my story is an immigrant story, is a testament to what immigrants have contributed to this country.”

Julian Castro introduces the last Democratic presidential hopeful, Hillary Clinton at a “Latinos for Hillary” grassroots event October 15, 2015 in San Antonio, Texas. Does Castro have what it takes to win? (Photo by Erich Schlegel/Getty Images)

Bonus: His campaign manager is a Black woman.

Julian Castro and Maya Rupert have history. She once served as his senior policy advisor at the U.S. Department of Housing and Urban Development. Now, that she has left her role as senior director of policy at the Center for Reproductive Rights, you’ll see her by his side working on his presidential bid as his campaign manager.

Maya Rupert has experience in advocacy including federal legislation and regulations on housing, family policy, health, and employment. (LinkedIn)

Rupert has written for a number of national outlets on topics including the LGBT community, housing, employment, and immigration and has been recognized for her leadership in the Black community. Rupert has received her B.A. from U.C. Santa Barbara and her J.D. from U.C. Berkeley.