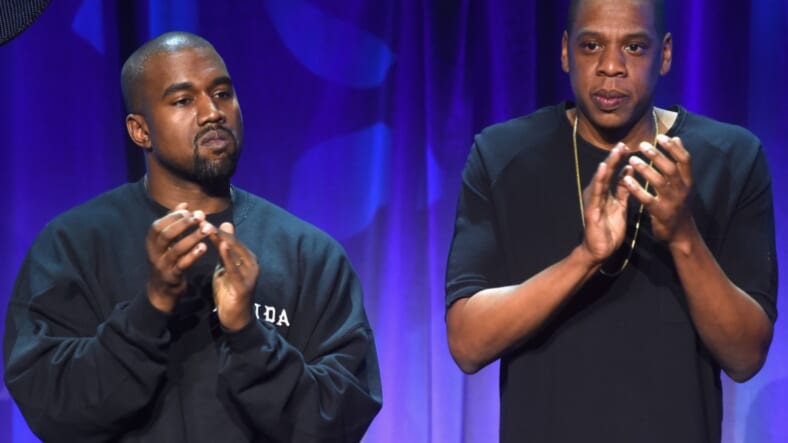 Kanye West fired off a string of lawsuits on Friday, seeking unspecified monetary damages from a number of record labels and music publishers as well as a “transfer of property.” According to THR, West is coming for Universal Music Group, Roc-A-Fella, Def Jam and EMI Music Publishing, claiming they owe him over a music dispute.

In his suit against Roc-A-Fella, Ye alleges he signed an exclusive recording agreement with the label and is seeking monies owed from that deal. The suit also mentions songs he produced for Jay-Z’s 2001 LP “The Blueprint.” As reported by TMZ, Jigga sold his share in Roc-A-Fella back in 2004 and no longer has any involvement in the company. The celebrity news site also claims that in spite of the lawsuit, there’s no beef between Mr. Sean Carter and Mr. West.

EMI has handled the publishing rights to Kanye’s music since 2003 before the release of his debut, The College Dropout. In his lawsuit with the company, the rapper alleges that in 2003 he signed a contract that would allow him to produce songs for other artists. The hitmaker says that by the end of 2011, he had written over 200 songs and gave them to the company. Now he’s asking a judge to intervene and help him collect royalties.

According to Rolling Stone, in non-redacted portions, Yeezy’s legal team mentions “a dispute between the parties’ rights and obligations to one another under the Recording Agreement and Extensions.”

Back in October, Ye ended his social media hiatus by sharing a 9-minute “Mind Control” video in which he ranted about his attempts to reclaim his publishing.

—The Dog is Free: DMX is back home following his federal prison sentence—

West continued by citing singer Prince and his issues with Warner Music, “Sony ATV told me I couldn’t buy my publishing [but] I got the money. So Big Jon [Platt], Marty [Bandier]… whoever is involved… I need my publishing… I got the money. I’m not gonna say the ‘S’ word. I’m not Prince, I don’t need to write it on my face.”