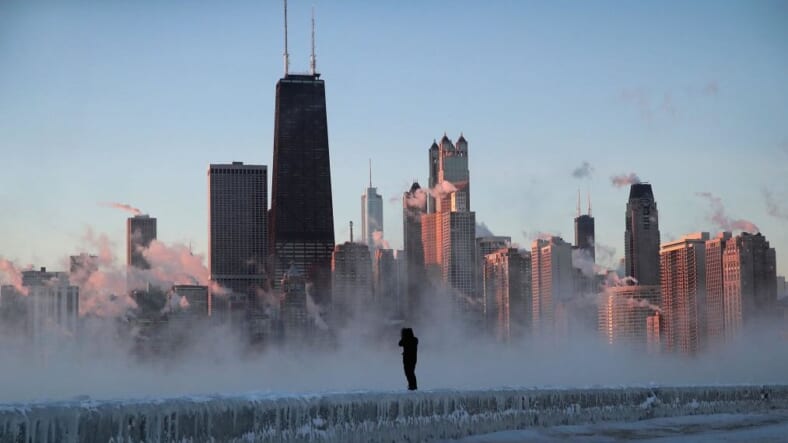 CHICAGO, ILLINOIS - JANUARY 31: A man walks along an ice-covered break-wall along Lake Michigan while temperatures were hovering around -20 degrees and wind chills nearing -50 degrees on January 31, 2019 in Chicago, Illinois. Businesses and schools have closed, Amtrak has suspended service into the city, more than a thousand flights have been cancelled and mail delivery has been suspended as the city copes with record-setting low temperatures. (Photo by Scott Olson/Getty Images)

A good Samaritan helped to get 70 homeless people into safe and warm accommodations during brutally cold temperatures in Chicago by paying for hotel rooms.

Chicago is experiencing a record-breaking cold snap that rivals Arctic temperatures. Those vulnerable to the icy weather like the homeless, were seen camped out in a tent city after their propane tanks to keep them warm were taken, reports The Chicago Tribune.

A Salvation Army spokeswoman Jacqueline Rachev told the Tribune that one of the propane tanks the group was using exploded. The Chicago Fire Department then confiscated all the other propane tanks because they posed a hazard.

“We responded to a fire,’’ department Chief Walter Schroeder said. “When we got there, the fire was extinguished and they found all these propane cylinders. That’s when we escalated it to a Level I Hazmat.’’

“There was a significant amount of propane there, and with that many cylinders, that’s like a bomb going off,’’ he added.

As Rachev prepared to move the homeless population to a makeshift warming center at the downtown Chicago Salvation Army, she was informed that a charitable donor was picking up the tab to place the homeless group in hotel rooms.

“All the folks there, some wonderful citizen is going to put all of them up at a hotel for the rest of the week,” she said.

One person, however, did opt to stay at the warming center, the paper reported.

READ MORE: Bill Cosby pretending to be a real life doctor and diagnosing ‘patients’ in prison

Prisoners shovel snow in the cold

A shocking photo has surfaced of inmates at Chicago’s Cook County Jail shoveling snow is frigid weather without any coats or warm gear to keep them from getting frost bite, The Daily Mail reports.

“They have the prisoners cleaning snow with little protection from the cold.”

To add insult to injury, the men reportedly were only “paid $2 for their labor as part of the Sheriff’s RENEW program,” the fund said.

“We commented on their working conditions & the absurd idea that this was workforce training,” the fund tweeted.

The RENEW program reportedly “aims to reduce neighborhood blight in distressed suburbs while also providing vocational training to a targeted group of inmates.”

“We hope the Sheriff’s Office will provide the public with information about what is going on here and how these folks are being treated,” the fund tweeted.

According to The Chicago Tribune, Cara Smith, chief spokeswoman for the sheriff’s office, said that “the situation was entirely and intentionally misrepresented.”