Newly elected Harris County Judge Cassandra Hollemon, who was one of 17 black women to win bench positions in Texas, lost her life to pancreatic cancer, her daughter says 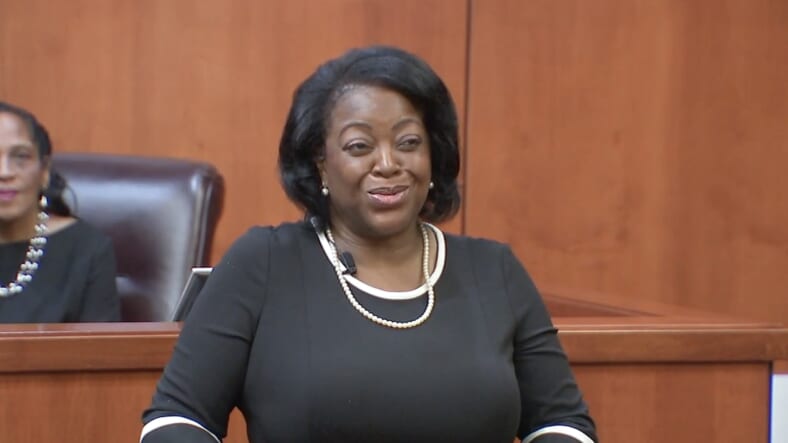 Cassandra Hollemon, a vibrant and talented person with a sharp sense of humor, was elected as a judge in Texas last fall in an historic and sweeping movement that would see 19 African-American women in Harris County win judgeships. But on Monday, Hollemon, died after weeks of struggling with health issues, according to the Houston Chronicle. She was 57.

Her daughter, Brandy, told the Associated Press that her mother died Monday, about a week after being diagnosed with pancreatic cancer.

READ MORE: All 19 Black women ran for judicial seats in Houston during midterms and won

Since taking over Harris County Criminal Court of Law 12, Hollemon set out to tackle local justice reform, recently joining her colleagues in efforts to settle the landmark lawsuit over the county’s cash bail system. She served on the Community Supervision and Pretrial Services Committee.

“We are saddened by the passing of Judge Cassandra Y. Hollemon,” her colleague, fellow misdemeanor judge Darrell Jordan. told the Chronicle. “She was a compassionate judge who treated one in a respectful manner.”

The Harris County Commissioners Court will now have to appoint a replacement for Hollemon, Barbara Armstrong, a managing lawyer at County Attorney Vince Ryan’s office, told the Chronicle. The replacement judge, likely to be another Democrat, will serve through 2020, with an option to run in an election to complete Hollemon’s unexpired term ending in 2022.

READ MORE: Kamala Harris on AG record and criminal justice system: ‘It is applied unequally based on race and based on income’

“She was competitive; she was a fighter,” said Judge Shannon Baldwin, a misdemeanor Harris County administrative jurist , according to the Chronicle. “It’s really sad and humbling that she’s not here with us now.”

Hollemon reportedly started to have health challenges shortly after taking the bench, her colleagues told the newspaper.

Members of the legal community were saddened by Hollemon’s death and offered their condolences.

“We have lost a promising judge, who had plenty of life experience, and had just realized her dream,” said Harris County District Attorney’s Office Chief of Staff Vivian King, who’d known the judge for years, according to the Chronicle. “She was dedicated to using her new position on the bench to protecting crime victims and ensuring all defendants are treated fairly.”

Hollemon leaves behind a son, a daughter, and a granddaughter. Her funeral is scheduled for Saturday.